The 2019 WSOP Main Event is in full swing, but that didn't stop the rest of the WSOP from continuing. Two more pieces of bling were up for grabs and they were won by first-time bracelet winners from Portugal and Finland. 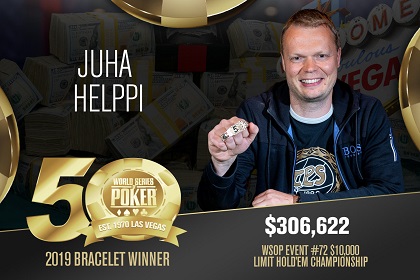 Finland is known for their ice hockey goalies and poker pros. I really can't explain why that is. It must be the long, frigid winters where kids decide they want to become a hockey star and when those dreams don't pan out, they turn to poker. Both require steely nerves and require the participant to have a calm and cool resolve when things get freaky.

It took over a decade (14 years to be exact) to finally win a bracelet, but Juha Helppi stepped into the winner's circle one after a victory in 10K Limit Hold'em.

Helppi previously made six other WSOP final tables, but he was finally able to take one down.

Josh Arieh went deep in another event this year but hos run ended in sixth place for a $53K score. Kevin Song hit the bricks in fifth place, followed by Anthony Marsico in fourth place.

When Tommy Hang got knocked out in third place, it set up the final between Mike Lancaster and Juha Helppi. Hang earned nearly $134K for his efforts.

With two to go, they had to get comfy because heads-up took five hours to determine a champion. Lancster started with bigger stack but the two would swap the lead back and forth too many times to actually count. Ah, those pesky LHE tournaments can take a lot longer than NL, eh?

Lancaster busted in second place, which paid out $189,505. Not too shabby, eh for a runner-up?

Juha Helppi took down his first bracelet and a first-place prize worth $306,622.

Joe Cada and Vieria got heads-up for the bracelet. Cada could not put away the pro from Portugal and win bracelets in consecutive years.

Cada banked $468,488 for second place, which is not too shabby for a runner-up finish.