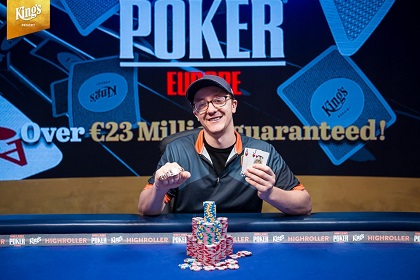 Ship it to Australia two times. Kahle Burns came into the 2019 World Series of Poker Europe without a bracelet in his collection. But now he'll leave the King's Casino in RozVegas with at least two pieces of bling in his collection. Earlier in the week, Burns outlasted 83 runners to win the €25,500 Platinum High Roller for a sick score worth €597K. And a couple of days later, he caught lightning in a bottle once again with another victory in 2019 WSOP Europe Event #13 €2,500 Short Deck NL.

The final table included Kahle Burns, Manig Loeser, Felix Schulze, Federico Anselmi, Vladimir Peck, Oshri Lahmani, and Pierre Neuville. Burns admitted his Short Deck game was not optimal because he just picked it up a couple of months ago. Heck, for a noob, he did pretty good, bruv!

Belgium's Pierre Neuville hit the bricks in seventh place. Neuville became the first player to bust at the final table when

Israel fared well at the King's Casino in RozVegas with multiple bracelet wins, but this time Oshri Lahmani could not go all the way. His epic run ended in sixth place.

With three to go, Kahle Burns found himself alive with two Germans preventing him from another title.

Felix Schulze busted in third place, which set up the finale between German pro Manig Loeser and Kahle Burns.

In this instance, Loeser could bot stop the inevitable force propelling Burns into the winner's circle for a second time this week. Manig Loeser banked €62,929 for a second-place finish. Not too shabby for a runner-up, eh?

Australia's Kahle Burns earned a first place payday worth €101,834. He also slapped a second bracelet around his wrist for his second bling this week.

When asked about his victory, he matter-of-factly said, "I avoided all the coolers."

Fading those coolers is always a vital aspect of winning a poker tournament. Kahle Burns has been untouchable over the last week.

How long will this run good last for the Aussie? He won a Platinum High Roller outlasting several of the biggest big dogs in the world and then took down a Short Deck event, even though he's still learning the intricacies of the game. His instincts have been spot on... which is why he took down multiple events in RozVegas.