Just another wild and wacky Wednesday at 2019 WSOP at the Rio Casino in Las Vegas. The running of the Monster Stack Donkament is finally over. The survivor banked a cool million and a shiny new bracelet. That's what the victor got for surviving the monster donkament in Event #50.

Meanwhile, the $50K Poker Players Championship continued with the third day of action. Phil Ivey and Johnny World Hennigan headed into Day 3 as the two big stacks. Only one of them was left standing at the end of Day 3. Phil Ivey locked up a min-cash and he's the big dog with 11 others still alive and fighting for the Chip Reese Trophy. 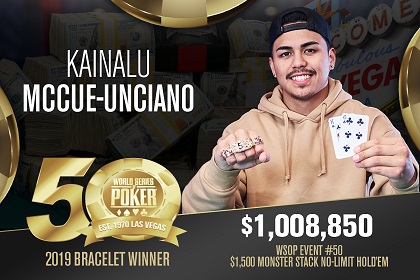 After a lengthy branded event, the MONSTER STACK finally crowned its champion.

This year's MONSTER has a $1,500 buy-in (ergo, a Monsterdonkament aka Donkmonsterment) attracted 6,035 runners and a prize pool that nearly passed a whopping $8.15 million. The top 906 places paid out in the MONSTER.

The winner would walk away with a cool million. The top five places won at least a quarter-mil with $623K set aside to the runner-up. Not too shabby, eh?

Bart Hanson's magical run ended when he hit the bricks in fourth place. He banked a sick score worth $344,079.

Canada's Greg Katayama busted in third place, which set up a heads-up heavyweight bout between Vincent Chauve and Kainalu McCue-Unciano.

Chauve could not put away KMU and busted in second place.

Ship it to KMU! Kainalu McCue-Unciano won a cool million a slick piece of bling.

Chris Klodnicki bubbled off the money in unlucky 13th place. A min-cash is worth $72,078, while first place pays out $1.1 million.

Heading into Day 4, only a dozen players remain. Ivey has the biggest stack left with over 4.77M. Josh Arieh is the only other player with at least 4M in chips. Shaun Deeb and Bryce Yockey are the only players with over 2.3M.

Jungleman is the super short stack with 12 to go.

This special dozen returns on Thursday and will play down to a final table, which is supposed to take place on Friday.