The 2019 World Series of Poker continued with a wicked and wild weekend at the Rio Casino in Las Vegas. A couple of pros added another bracelet to their collection, while one of the best pros in the history of British poker finally earned his first bracelet win after a rare appearance at the WSOP.

By the end of the weekend, Jiyoung Kim took down the Women's Events and bracelets were secured by Asi Moshe, Ari Engel, Loren Klein, Asi Moshe, Luke Schwartz, and Stephen Chidwick.

Engel, Chidwick and Schwartz won their first bracelets. Amazing to think that before this WSOP began that those three gentleman had zero bracelets to their name.

A couple of players added more bling to their collection. Loren Klein took down his fourth bracelet in the last four years. Asi Moshe won his third piece of bling with a nice score in the Bounty event. 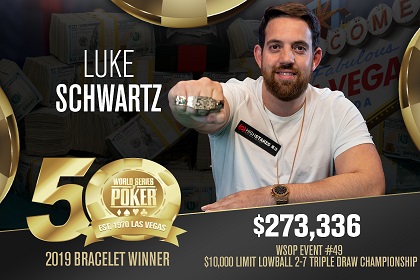 The Lowball bracelet event is one of those important pieces of history that I'm sure a lot of modern and noob players do not fully respect. These lowball games seem like fetish events or an easy way to boost your bracelet numbers, but in reality, it's been a barometer of poker talent for the last 50 years in Vegas and for almost a full century in gambling halls across American dating back to the wild days of frontier gambling.

This year's $10K lowball event attracted an even 100 players. Luke Schwartz had to outlasted 99 other players to lock up his first bracelet victory.

Only the top 15 places paid out, or 15% of the total pool. Mike Gorodinsky bubbled the final table in seventh place.

Cal Anderson hit the bricks in sixth place, followed by Yu Shu in fifth place. Mark Gregorich busted in fourth and missed out on another piece of history.

The Germans have been dominating the tournament scene in the back end of the 2010s, but they have not been crushing the WSOP like the Brits. Becker's run ended in third place.

Luke Schwartz defeated American George Wolff to win the tournament and the bracelet. Wolff banked $169K for second place. Not too shabby for a runner-up prize, eh?

Schwartz finally stepped into the winner's circle. The brash Brit has been crushing virtual souls since he was a teen, but he finally got to slap a piece of bring around his wrist. He also earned a payout worth $273,336.

Ari Engel finally popped his WSOP bracelet cherry with a victory in $2,500 NL. After 43 cashes he finally went the distance.

Ship it to Stevie444. Stephen Chidwick is one of the greatest tournament players in the history of universal gambling. The Brit added a first bracelet to his collection of poker titles and banked another $1.6 million. What else can we say about Chidwick that hasn't been said before? Through the ups and downs of the crazy poker world, he's been able to roll with the punches and continue to crush the tables.

This year's $25K PLO High Roller attracted 278 players and a prize pool of $6.6 million. Only the top 42 places paid out. All of the money was at the top of the heap with $1.6 million set aside to first place and $1.1 million to second place.

Chidwick defeated James Chen heads-up for the trophy and $1.6 million in cash. Oh, and his firt bling. Chen earned a runner-up score worth a cool million. Not too shabby, eh?

Four in a row, eh? Reno pro Loren Klein added a fourth bracelet to his collection. He's now won bling in each of the last four years at the WSOP. He's been on a consistent roll the last couple of years.

This year's event attracted 218 players. Only the top 33 places paid out.