And then there were three fighting for $10 million. On Day 9 of the 2019 World Series of Poker Main Event, five players -- Germany's Hossein Ensan, poker industry's Garry Gates, Chicago's Kevin Maahs, Canuck transplant living in Las Vegas Alex Livingston, and Italy's "Super" Dario Sammartino -- slugged it out for another grueling evening of poker at the Rio Casino in Las Vegas. Only three of them advanced to Day 10 while two of them were sent packing.

The World Series of Poker can be brutal. It's one of those rare instances when you can win millions of dollars and still feel like a failure. Regardless of the self-hate, to even be among the final nine out 8,569 (aka the second-largest Main Event pool in WSOP history) is quite a feat.

However, only three remain and will return for action on Day 10. Will Canada, Germany, or Italy be celebrating the next champion? 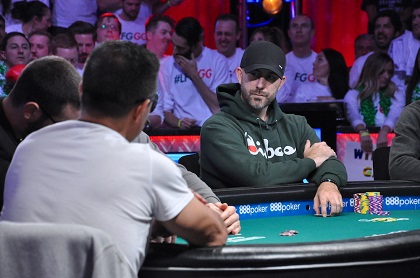 In the first hour, short-stacked Sammartino doubled early on to keep his head above water. Garry Gates lost some chips and fell back under 100M for the first time in a while. Meanwhile, the rich got richer and Ensan closed in on 300M.

The chase pack (Livingston and Maahs) gained on the two biggest stacks and nearly caught up to Gates.

By hand #100 at the final table, Gates slipped to third overall while Alex Livingston moved into second overall. Ensan had his eye on 300M and held over 45% of the chips in play.

Gates' slide continued when he got his hand caught in the proverbial cookie jar. He tried to bluff at a pot with King-Jack against Livingston's Ace-Jack and pair of Aces. Gates slipped to 38M and was now battling with Maahs for the basement. Livingston surged to over 110M.

On Hand #111, Kevin Maahs hit the road in fifth place when his

lost a race against Ensan's pocket nines. Maahs banked $2.2 million for fifth. Ensan pushed over 300M. Gates was the new shorty with 36M.

Gates didn't last more than nine hands before he met his fate in fifth place. Heck of a cooler too in a battle of the blinds. Livingston's pocket Queens ambushed Gates' pocket sixes. Despite the cries of "Six! Six! Six!" from his lively rail and every poker media member (past, present, and future) calling in their one-time chips, the Queens held up for Livingston. Gates' magical run ended in fourth place, which paid out $3 million.

Livingston chipped up to 120M, but trailed Ensan's overall lead with nearly 327M. Sammartino is the shorty with 67M heading into Day 10.

With three to go, played got suspended for the evening. Everyone returns on Tuesday to play down to the champion. Third place pays out $4 million, while the runner up banks $6 million. And of course, first place pays the bling and the cash... $10 million worth.