The 2019 WSOP Main Event commenced Sunday evening at the Rio Casino in Las Vegas, Nevada for the 50th anniversary of the most prestigious tournament in the universe. The opening day of the final table went much faster than anyone expected, mostly due to two players busting in the first 11 hands. By the end of the night, only five players remaining and four players bid their goodbyes.

The two big stacks coming into the final table, Hossein Ensan and Garry Gates, still retained their girthy status. It seems like those two are on an inevitable collision course, but there's also three other players remaining, albeit two super short stacks and a mid-size stack. 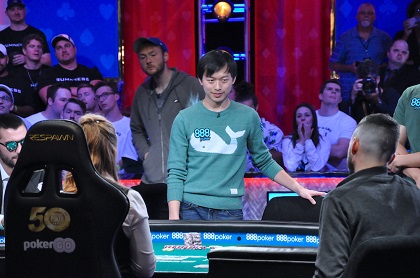 Milos Skrbic became the first player to exit at the final table when the Serb busted in ninth place. They didn't even play a full orbit before Skrbic got it all in on the sixth hand with Ace-Jack against Garry Gates' Ace-Queen. Mrs. Slick held up for GG and Skrbic hit the rail first.

Skrbic banked a cool million for ninth place. GG chipped up to 125M.

Tim Su, who led the Main Event at several key moments over the previous two weeks, hit the bricks in eighth place. Su made a final stand with pocket treys against Ensan's Ace-Jack. Ensan flopped Jacks up and rivered a full house to knock out Su.

Su earned a payout worth $1.25 million for eighth place. With seven to go, Ensan closed in on 200 Million in chips.

The UK's Nick Marchington marched home in seventh place after he ran the Tourist (aka Ace-seven) into Ensan's pocket Cowboys. Heck of a time to get ambushed by the big dudes. Alas, the Kings held even though Marchington turned an open-ended straight draw. Alas, it never materialized and Kings held up for Ensan. The rich got richer while Marchington busted in seventh place, which paid out $1.525 million for the young Brit.

With six remaining, they decided to play a full level. Ensane led with 197M and GG was second with 155M. Dario Sammartino was the shorty with under 35M.

On Hand #56, Zhen Cai decided to rumble and race with Big Slick against Maahs pocket nines. Cai flopped a Broadway gutter draw. However, Maahs dodged the bullet and pocket nines held up to win the pot. Maahs chipped up to third overall.

Cai was the fourth player eliminated on a day that only three were scheduled. For a sixth-place finish, Cai banked $1,850,000.

Action resumes Monday night at 6:30pm local time and will be aired on a 30-minute delay. They will play down to three players on Day 9.