The third day of action at the 2019 World Series of Poker Main Event saw the field trim itself down as it got closer to the money. This year's min-cash is worth $15,000 with 15% of the field getting a cut of the pie. This year's Main Event has the second largest prize pool in history with $80.5 million and the largest in the post-Black Friday era.

After Day 2AB, only 1,087 made the cut for Day 3. After Day 2C, only 1,793 players advanced to Day 3. The consolidated field all played together for the first time as opening flights ABC and secondary flights AB and C combined into a single field. That meant 2,880 players were still alive out of the initial 8,569 decadent dazzlers, diligent dreamers, broke-dick degens, and dastardly donks.

Just when you thought the money bubble would burst early on Day 4, it popped late on Day 3. That simplified things from a logistics standpoint for the WSOP because they halted play with 1,286 and will be able to swiftly pay out the horde of min-cashers that get sent packing early on Day 4.

Chainsaw Kessler bagged up a big stack at the end of Day 1. On Day 3, Chainsaw survived with 516K. 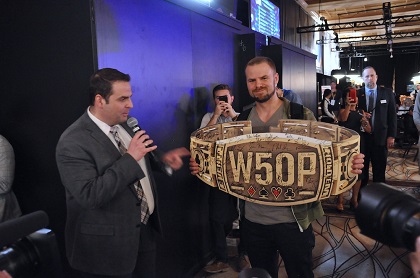 No one actually got paid on Day 3 of the Main Event, which means anyone who busted on Monday went home empty handed. They stopped play when the bubble burst, which is always one of the most stressful and exciting moments of the year.

Ryan Pochedly is the proverbial Bubble Boy who busted in 1,287th place.

Tuesday is official payday at the WSOP Main Event.

Julian Milliard started Day 3 with the lead at 947,900. Andrew Brokos (pro, author, podcaster from "Thinking Poker") was third to start the day. By the end of Day 3, Milliard coughed up the lead buy he bagged 1.2M or somewhere in the Top 50. Brokos rocketed all the way toward the top of the chip counts. Brokos had 1.9 million, or good enough for second overall.

At the end of Day 3, Preben Stokkan is stoked that he bagged up the lead with 2.1 million. He became the first player to pass 2M in chips but he was super short and down to one chip before running up his stack in true Scandi fashion.

By dinner break, 600 players were liquidated and Galen Hall became one of the first players to pass 1M in chips. Shortly after, Joh Hashem snagged the lead with 1.4M. Bart Lybaert and Andrew Brokos also passed the 1M mark.

When Day 3 ended, 1,286 players remained. Defending champ John Cynn is not one of them. He busted late on Day 3 and missed the money. We will be crowning a new champ this year.

Chainsaw Watch: Allen Kessler passed 1 million in chips and he bagged 1.2 million. He's not in the Top 100 but he's still alive with a healthy stack.

Only a trio of Main Event Champs are still alive and they all locked up a min-cash including Chris Moneymaker, Qui Nguyen, and Johnny Chan.

Ex-champs Scotty Nguyen, Joe Hachem, and John Cynn were all eliminated before the money bubble burst.