Mondays at the Rio are fun when you cash for six figures and hoist a bracelet over your head while the local press and poker media snap your image for immortality purposes. It came down to Nick Schulman and/or Brian Hastings to determine the winner in Event #65 $10,000 PLO 8 Championship. Hastings was seeking his fifth bracelet while Schulman wanted a third. 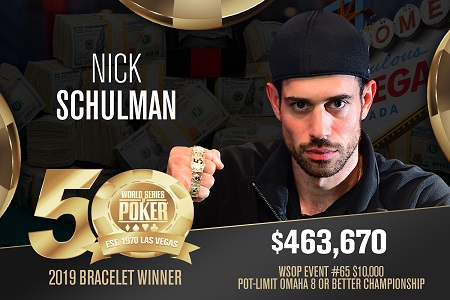 Schulman made over 16 final tables but he never won a WSOP event that was not 2-7 Lowball (with wins in 2009 and 2012). Schulman is a Lowball King, but this time he was the lone wolf standing in 10K PLO8.

It took seven years to snap a cold spell, but Schulman went the distance to add a third piece of shiny bling to his trophy case. It is truly a special day because you will never forget your first non-Lowball bracelet. It is like losing your virginity or witnessing the birth of your first child. Behold… the moment hath arrived for one we once knew as 'The Takover'.

Hachem, who is most known as the Aussie who won the WSOP Main Event after Greg Raymer and the last player to ever win a bracelet and Main Event at Binion's, went deep in this one but he missed another bracelet by a couple spots.

In the 10K PLO8 Championship, Hachem busted in third place with paid out $201K.

Hachem's elimination set up the heads-up heavyweight battle between two former young guns from the height of the online poker boom: Nick 'The Takeover' Schulman and Brian 'Stinger88' Hastings.

Hastings is a jack of all trades and a well-rounded hybrid pro that can smack you silly on the virtual felt and in real life with WSOP bracelet victories in HORSE, 10-Game Mix, Stud, and HU NL. Stinger88 came super close to binking a PLO8 event to add a fifth and totally different bracelet to his resume, but he could not thwart Schulman on The Takeover Day.

Anatolii Zyrin took down the bling and nearly $200K in cash for outlasting a field of 717 runners that created a prize pool worth $967,950.