Another wild and wooly Saturday night in Las Vegas. They handed out a couple more bracelets at the Rio Casino too with the MARATHON event finally ending after a marathon-like tournament.

A Russian found himself as the last player standing in 2019 WSOP Event #26 $2,620 NL MARATHON. Roman Korenev went the distance to win his first bracelet and the first bling for Russia. 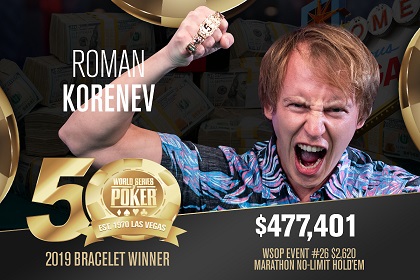 The MARATHON is one of those branded events that suits love because it sounds cool and gives the marketing department something to work with. I mean, it's all about selling the dream of the WSOP but you need a few key catch phrases along the way to help sell the dream of cash, bracelets, and poker awesomeness.

The 2019 MARATHON event at the WSOP attracted 1,083 long distance runners aka poker players. They created a prize pool that topped $2.5 million. Only the top 163 places paid out.

Roman Korenev advanced to his second final table, but he managed to go the distance in this one. He picked off American Jared Koppel heads up for the victory.

Jared Koppel banked $295K for second place for six days of work. Not too shabby, eh?

Korenev took down his first bracelet and earned a payout worth over $477K.

Meanwhile over in PLO, they attracted 1,526 runners for the 1K PLO-donkfest. The prize pool topped $1.375 million with only 229 places get a cut of the PLO pie.

Luis Zedan, a Miami businessman originally from El Salvador, was the last player standing in PLO. He banked $236,673 for winning Event #30 and also earned his first bracelet. He also notched the first win for El Salvador.

Zedan said he will be donating 35% of his score to charity.