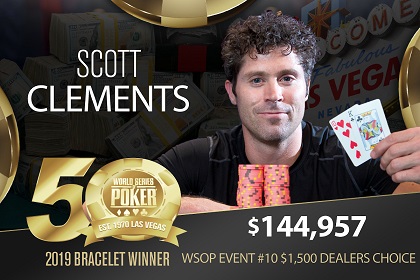 The action continued at the 2019 WSOP at the Rio and two more bracelets were awarded. The DEEPSTACK finally saw a champion after the event got extended an extra day due to the girthy field. And then over in the Dealer's Choice, a blast from the past emerged as the victory.

Lot of weird things can happen in 12 years. Especially in Las Vegas. Heck, in the poker world years are similar to dog years so two years in Vegas is like 14 in real life. The grind ages you but you're too deep into the craziness to notice. For Scott Clements, he waited nearly 12 years, or 84 in poker dog years to return to the winner's circle. Once you get the taste in your mouth, it's impossible to curtail your urge to return to the madness. Clements made the trek down the lengthy corridors at the Rio the last decade to no avail. Alas, he finally got that 12-year old monkey off his back.

Clements had made 20 final tables at the WSOP and went the distance in three of them. His previous bracelet wins occurred during the apex glorious poker boom in 2006 and 2007 when he was known more for his online moniker of BigRiskky. He won his first bracelet in 2006 in Omaha Hi/Lo, a game in which he was considered one of the best young 08 players in the world. He defeated Thor Hansen heads up for the bling and $301K in cash. The next year, Clements took down a PLO in 2007 for a $195K score. He blanked in the next 11 years at the WSOP, but finally broke through in 2019.

Clements found himself heads up with Tim McDermott for the bling. Clements didn't squander this opportunity and put away McDermott in second place. For a runner-up share, Tim McD banked $89,567. Not too shabby, eh

Clements banked nearly $145K for his score in Dealer's Choice. Oh, and now he has three bracelets in his collection. That 12-year itch has been scratched.