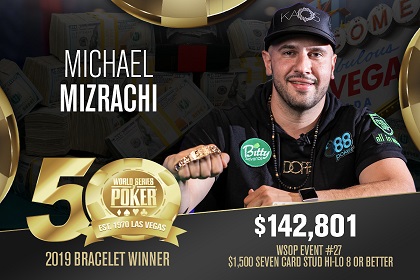 Five bracelets. Five. The Grinder put himself in a special category of players who won five World Series of Poker events. With so many events these days at the WSOP (and overseas), especially at bargain-basement prices, winning a bracelet isn't what it used to be.

Then again, winning multiple bracelets is really the only way to separate the luckboxes and flashes in the pan from bona fide pros.

Five bracelets is one of those numbers that's become a good measuring stick to determine the best of the best.

Before last night, were 10 players siting on 5 bracelets and 15 total with 6 or more. The Grinder just joined the 5 Bling Club. He's now one of 26 players in the history of poker with at least five bracelet wins.

The Grinder won his fifth bracelet in 17 final table appearances at the World Series of Poker over the last 14 years or so. The Grinder won the 50K Poker Player's Championship three times including last year when he binked his fourth WSOP bracelet. The Grinder also shipped the 50K PPC in 2010 and 2012.

The Grinder also has a Europe bracelet if you are one of those purists who don't think non-Vegas WSOP bracelets should count. The Man counts the bling, so that's that. The Grinder has 5 bracelets.

That's a sick number anyway you cut it. Five.

The latest victory pushed Mizrachi over $9.3 million in WSOP earnings. According to Hendon Mob, the Grinder won over $17.1 million during his illustrious career as a poker pro.

Even if the Grinder never plays another tournament, he will still go down as one of the greatest poker players of all time. It's crazy to think he still has a couple of more decades to chase down another five pieces of bling.

The 2019 WSOP Event #27 was the Stud 8 Donkament. It attracted 460 Stud Hi/Lo specialists and noobs from all walks of life. The prize pool topped $621K with almost $143K set aside to the champion.

Jose Paz-Gutierrez from Bolivia was the token-non-Yank at the final table. Paz-Gutierrez bounced in sixth place and missed winning the bling for Bolivia.

The Grinder found himself heads-up against Robert Gray. Alas, Gray could not stop the destiny of the Grinder. Gray banked $88,254 for second place. Not too shabby, eh?

The Grinder walked away with $142,801, but he also added another shiny piece of jewelry to his collection. Ship it to the Grinder, five times.

Ryan Laplante went deep in another WSOP event, but his run ended in third place in Event #28 $1,000 NL. When the dust settled, Stephen Song from Greenwich, CT took down the 1K NL bling.

Laplante earned $154K for a third-place finish. Song defeated Scot Masters heads-up for the victory. Masters banked $211K for a runner-up finish. Song won his first bracelet and $342K in cash. Not too shabby, eh?

Phil Hellmuth busted in 16th place and missed out on winning another bracelet.