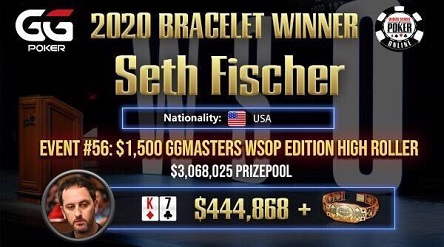 The 2020 World Series of Poker Online chugged along with a couple more events that saw winners earn over $444K-plus in cash, in addition to the coveted bling. Two more first-time winners were awarded bracelets in the WSOP Online at GGPoker. You can add USA's Seth 'AbeFroman' Fischer and Brazil's Luis 'Xapilskinha' Assuncao Garla to the history books.

Another Brazilian binked a bracelet over in WSOP Online Event #55 HK$8,000 NLHE Asia Championship. A total of 3,247 runners took a shot at the glory and the bling. They created a prize pool worth $3.2 million and the top 404 places paid out.

Meanwhile, over in WSOP Online Event #56 $1,500 GGMasters WSOP Edition High Roller, that event attracted 2,153 runners and a prize pool over $3.07 million. The top 314 places paid out in the High Roller.

Seth 'AbeFroman' Fischer and Arsenii 'kastaban' Karmatckii slugged it out for the cash and bracelet. Karmatckii banked $328,491 for a runner-up finish. Not too shabby, eh?

AbeFroman won his first-ever bracelet and $445K in cash. Well done, Ferris. If you're not familiar with the screen name, it's an homage to “Ferris Bueller's Day Off” starring Mathew Broderick. During one of the funniest scenes in the movie, Ferris Bueller and his friends sneak into a fancy restaurant and steal the reservation set for Abe Froman aka the Sausage King of Chicago. Hilarity ensues.