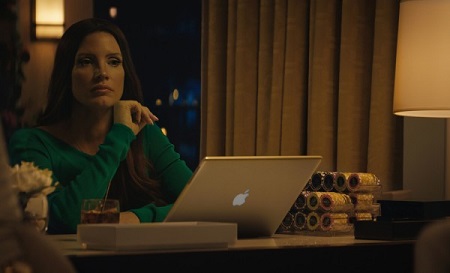 Molly's Game is getting Oscar buzz and the high-paced story about a high-stakes poker host Molly Bloom (played by Jessica Chastain) the film just opened in limited markets on Christmas. Molly's Bloom was a highly-anticipated film in the poker/gambling world. Poker players around the world were united in wondering how Hollywood would screw up another poker film. To increase the overall stakes, Molly's Game marked the directorial debut of Aaron Sorkin. The award-winning writer and showrunner took his first shot behind the camera with an epic story about a young woman up against The Man.

How did a Colorado girl get sucked into the fast-paced degen-world of high-stakes poker in Hollywood and New York City? Molly had an overbearing shrink of a father (Kevin Costner) who pushed all of his kids toward athletic excellence. Bloom's brother was a top-ranked skier and she had a specific goal to make the Olympics in freestyle skiing. After an accidental fall, Bloom's dreams were crushed. When Molly Bloom's aspirations to make the U.S. Olympic ski team never came to fruition after a nasty crash on the slopes, she took a year off before entering law school.

While in Los Angeles in the mid-2000s, Bloom got sucked into the world of high-stakes poker... and she knew nothing about the game when first started. Molly got her start running a game for her boss, a surly real estate investor and degen gambler. His weekly game ran out of the basement of the Viper Room, the infamous club on Sunset Blvd., where Molly was introduced to Hollywood stars and other industry big wigs. After a fall out with her boss, Bloom moved out on her own. She created her own hosting company and ran high-stakes games in swanky hotel suites in Beverly Hills.

The games were built around Player X (changed for legal reasons, but named as Tobey Maguire in Bloom's book), who had a knack for the game but played for more sinister reasons... and none of them had to do with financial incentives. "I don't like playing poker, I like destroying lives."

Player X (Michael Cera) convinced Molly to host bigger stakes (from $10K buy-in 50/100 to $50K buy-in and 250/500 blinds), which was running awesome for a while until she Player X butted heads over tips and how she ran the game.

The supporting players in the game have some of the funniest scenes. Bad Brad, a hedge fund manager, is the biggest fish in the game. Harlan, a regular at Commerce, is biggest nit who goes on mega tilt in one epic scene of degeneracy.

After a rift with Player X and a dead game in Hollywood, Molly moved to New York City to focus on running games for Wall Street banksters, hedge fund bros, and trust fund degens. Even one of the N.Y. Yankees played in her NYC game. She eventually bumped up the stakes to $250K min buy-in and she recruited regs from a high-stakes game in Brooklyn... Russian businessmen. Molly didn't know they were mobsters... but the FBI did... which is why the Feds raided Molly's apartment and froze her bank accounts.

Molly convinced a high-priced criminal attorney (Idris Elba) to represent her without an upfront cash retainer either. The lawyer read her book, but Bloom filled in the rest of her story... which Sorkin told in a series of flashbacks. Bloom was up against The Man and her only crime was charging a rake in her game.

Sorkin's characters have always been quick-witted, go-getters... including Molly Bloom. Sorkin depicted Bloom as an entrepreneur operating in the shadowy world of gambling. In Sorkin's universe and in poker, Bloom was one of the few trustworthy people with integrity and honesty. Even facing imprisonment and up against the intimidating U.S. government, Bloom held steadfast to her beliefs.

I really didn't like the book, but enjoyed the film. The Oscar-winning Sorkin also wrote the script, which meant he had strong material to work with from the start. Molly's Game is not really a poker film. Sure, there's several poker scenes and those are some of the funniest in the film, but it's more of a sports underdog movie than an actual poker flick. I think it's sorta funny... how do you get a bunch of degen dudes to go see a movie about feminism in a corrupt capitalist world... make it about high-stakes poker.