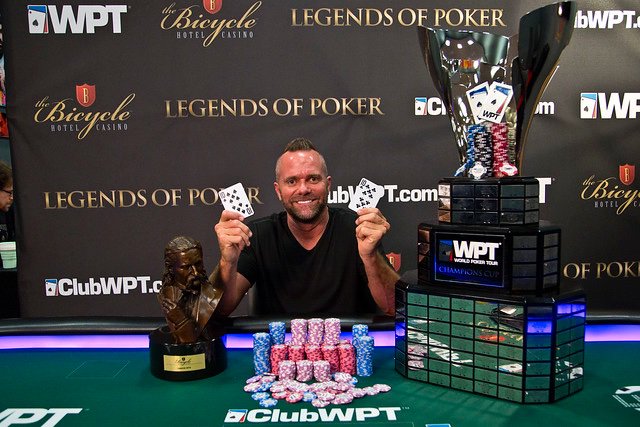 Ship it to AVB! The newest season of the World Poker Tour, Season 18, kicked off at the end of July in Los Angeles with the WPT Gardens. The WPT stayed in SoCal for another event with the WPT Legends of Poker hosted at the historic Bicycle Casino on the outskirts of Los Angeles. The Bike is an epic spot for all things poker in LA, whether you're a pro, degen, or someone looking for action.

After the Bike, the WPT heads east to luxurious Atlantic City for the annual WPT Borgata Poker Open in mid-September before ending the month with the WPT Maryland. But for now, all eyes were on LA.

Last year, the WPT skipped the Bike and the Legends of Poker. However, it returned this year much to the delight of locals.

In 2017, Art Papazyan won two events on the WPT including the WPT Legends of Poker at the Bike. Art outlasted a final table that included both Phil Hellmuth and JC Tran.

Pat Lyons binked the WPT Legends of Poker in 2016. Mike Shariati won in 2015. Harry Arutyunyan went the distance in 2014.

The second stop on the World Poker Tour featured a $5,000 buy-in event at the 2019 Legends of Poker. A total of 520 runners took a shot at the title and a freeroll into the season ending Tournament of Champions... which will be hosted at the Aria sometime at the beginning of the summer.

The 2019 WPT Legends created a prize pool worth nearly $2.4 million with only the top 65 places paying out. Most of the cheesecake, as per usual, was at the top of the heap. The winner would walk away with the WPT title and nearly a half-million in cash.

The final table included Jisup Hwang, Antonios Roungeris, Vahan Sudzhyan, Aaron Van Blarcum, Gueorgui Gantchev and Jared Griener. I feel bad for the reporters covering this event because you really need to be a national spelling bee champion to correctly spell all of the final table players' names at the WPT Legends of Poker.

You knew it was going to be Aaron Van Blarcum's day when he won a pot with a royal flush. The poker gods were smiling upon AVB and he never looked back.

After 50-plus hands of five-handed action, it was Jisup Hwang's turn to hit the road. Hawng made a final stand with pocket treys against Gueorgui Gantchev's pocket Queens. GG turned a set of Queens and Hwang was dunzo.

On Hand #81, Vahan Sudzhyan made a final stand with

With three to go, AVB chipped up to over 10M.

On Hand #99, Jared Griener got it all-in with pocket sevens against AVB's pocket nines. The nines held up and AVB turned another set. For a third-place finish, Jared Griener won $226K.

Heads-up lasted 29 hands. On the final hand, GG got it all in with pocket fives against pocket tens. The tens held up and GG got picked off in second place.

For a runner-up finish, Gueorgui Gantchev earned a payout worth $306,265. Not too shabby, eh?