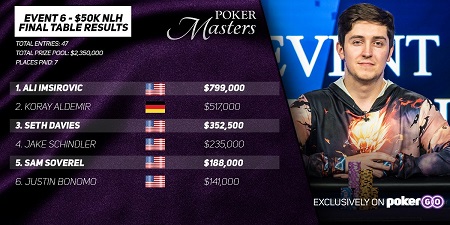 Ship it to Ali Imsirovic. Two times. The Aria Casino in Las Vegas has been hosting the 2018 Poker Masters, a series of high roller-centric events where the players are competing for a coveted symbol of super-ballerdom: the purple jacket. With seven events on the docket, the event attracted the biggest names in the high roller scene. However, right now everyone is talking about Ali Imsirovic's run. Imsirovic shipped the last two events, faded final tables with two of the hottest players on the planet (Justin Bonomo and Jason Koon), and rocketed into the top spot on the leaderboard. Imsirovic has the inside track to the purple jacket with one event to go.

So how did it happen? It all began with Event #5. It seemed like an innocuous $25,000 NL High Roller. The event attracted 66 total entries and a prize pool that was $1.65M. Only the top 10 places paid out. Elio Fox bubbled the final table in seventh place. He cashed along with Dan Shak, Bryn Kenney, and Dan Smith.

Ben Yu and Ali Imsirovic got heads-up for the bracelet. The 3-time bracelet winner was denied a victory when Yu was picked off in second place. Yu walked away with $330,000 for a consolation prize, while Imsirovic shipped $462K.

Imsirovic did not hesitate before he fired away at Event #6. It had double the buy-in or a $50,000 price tag. The sixth event attracted 47 runners and the total prize pool topped $2.35M. Only the top 7 places paid out. Bryn Kenney bubbled the final table but min-cashed when he busted in seventh place.

Imsirovic advanced to consecutive final tables. His second one included Koray Aldemir, Seth Davies, Justin Bonomo, Sam Soverel, and Jake Schindler. ZeeJustin hit the bricks in sixth place. Sam, Jake, and Seth were all liquidated next. That set up the heads-up fracas between Aldemir and Imsirovic. Alas, Aldemir couldn't prevent Imsirovic from reaching the winner's circle for a second time. Aldemir took home $517K for second place. Not too shabby, eh? Imsirovic took down a first-place score worth nearly $800K.

Going into the final $100K event, Imsirovic sat atop of the purple leaderboard with 660 points. Brandon Adams final tabled the first three events, which was the main reason he was second overall with 510. Only the top 5 places had a legit shot at a purple jacket, which meant Ike Haxton (480), Jake Schindler (390), and Ben Yu (360) were still in contention.

At the present moment, Imsirovic won $1.26 million over the last four days of action. As ElkY would say, “So sick!”