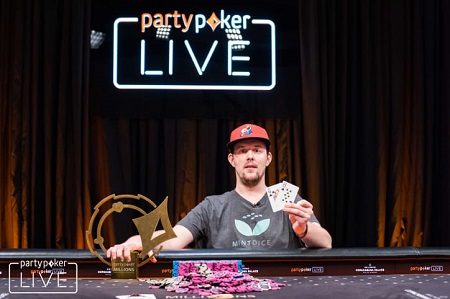 Vamooooooooos! Brazil is always a fun place to visit for work or pleasure. Copacabana Palace Hotel in Rio de Janeiro hosted the latest stop on the global poker circuit. The partypoker LIVE Millions played out in Rio with a $10K event. The MILLIONS South America had a $5 million guarantee with $1 million (or R$4 million) set aside for first place.

The Millions South America attracted 439 total runners. The top 55 were paid out, but the top few places were awarded most of the cheesecake. A cool million was initially set aside for first place. Alas, the final three arranged a deal between Martin Mathis, Matas Cimbolas, and Bruno Volkmann. When the dust settled, Mathis picked off Volkmann heads-up to win the title, trophy, and pile of cash.

Brazil's Bruno Volkmann headed into Day 4 with the chip lead and he bagged up the lead at the end of the day. He headed into the final table with the chip lead with 146M or over 54M more than Canada's Sam Gagnon in second with 92M. Mata Cimbolas was third overall with 83M and Vlada Stojanovic fourth with 67M. Caio Hey (aka Hey Carlos De Lima) started the final table as the short stack with Martin Robert Mathis also nursing a short stack.

The final three cut a deal and at that juncture, Bruno Volkmann held the lead with 207M, followed by Mathis 163K and Cimbolas' shorty with 66M. Cimbolas locked up R$2.2M, Mathis picked up R$2.65M, and Volkmann's share was worth R$2.75 million, or approximately $687K USD. They also left R$848K on the table to the champ.

. The American flopped a pair of tens and the Lithuanian failed to improve. Cimbolas hit the road in third place.

With two to go, Mathis found himself heads up against Bruno. It was America vs. Brasil in the finale.

Mathis sniffed out a bluff with

to snag the lead. He couldn't put away Bruno right away. The Brazilian was not about to go quietly into the night. After a couple of hours of a heads-up slog, Mathis finally pulled away.

The American landed the fatal blow with the classic hand: Queen-deuce versus Queen-eight. Neither player improved when the board ran out, but Bruno's hand could not come from behind to win.

Bruno Volkmann settled on a runner-up up finish, which was worth R$2,750,000 per terms of the deal. He banked approximately $687K USD for second place. Not too shabby, eh?