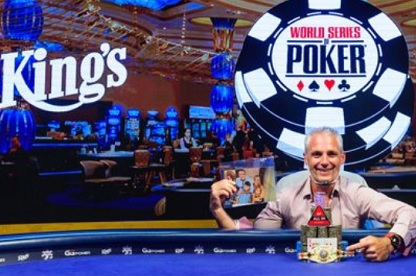 Ship it to Argentina! In a previous life, he raced cars. These days, Damian Salas gets his thrills on the poker felt. And he's only one heads-up battle away from becoming the 2020 WSOP Main Event Pandemic Champion.

Just a couple years ago, Salas got hot at the right time during the 2017 World Series of Poker in Las Vegas. He advanced to the final table, one of the tougher ones in years, that included Benjamin Pollak, Antoine Saout, Jack Sinclair, Ben Lamb, John Hesp, and eventual champion Scott Blumstein. Salas busted in seventh place, but banked his largest live score to date with $1.4 million.

And just three years and a global pandemic later, Salas has a shot at winning his first bracelet. The final table winners of the international and domestic leg will meet in a $1 million heads-up battle that also has a WSOP bracelet on the line.

So, how did it begin for Salas? It started two weeks earlier at GGPoker, where they hosted the 2020 WSOP Main Event International. A total of 674 players took a shot at the glory and the prize pool worth nearly $6.5 million. Only the top 80 players were awarded a piece of the cheesecake, with the majority of it set aside to the champion with a $1.55 million payday. The runner-up also banked a cool million.

Brazil's Brunno Botteon bagged the lead at the end of Day 2 on GGPoker, before action was paused before the final players restarted the final table live at the King's Casino in RozVegas. BB had over 10.2 million in chips.

China's Peiyuan "fish3098" Sun was a no show in RozVegas. Sun was one of the short stacks at the final table, but decided to not make the trip. As a result, Sun was awarded ninth place, which paid out $75,360.

Austria's Hannes Speiser became the first player to hit the rail at the King's Casino when he bounced in eighth place. Bulgaria's Stoyan Obreshkov bounced in seventh place, while Lithuania's Dominykas Mikolaitis saw his run end in sixth place.

Salas flushed out Ruivo on the river to send the player from Portugal packing in third place. Ruivo banked $728K for third place. Not too shabby, eh?

With two remaining, it was a heads-up battle between Brazil and Argentina. When the dust settled, Argentina prevailed.

Salas held a 24M to 14M lead over Brunno Botteon when heads-up began. But Boetteon could not stop Salas from racing to the finish line. Botteon busted in second place, which paid out a little more than $1 million.

Before the WSOP Main Event began, Salas was currently ranked #4 on the all-time money lost in Argentina with $2.6 million in earnings.