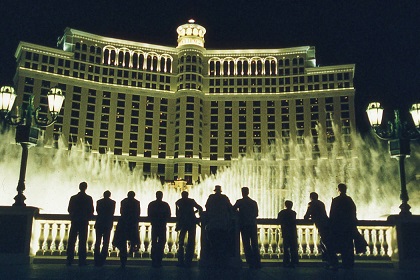 Another day, another robbery at the Bellagio's famous poker room. This time, the suspect and police exchanged gunfire in front of the Bellagio north valet entrance.

Approximately at 9:45pm, a man entered the Bellagio poker room and walked to the cage, located in the back of the historic room filled with cash games of varying levels. The robber demanded cash and/or chips and quickly fled when they had the loot. The suspect rushed by the sportsbook and made their way through the corridor with shops that is adjacent to the north valet entrance. The robber tried to carjack someone at the valet. After an unsuccessful attempt, four LVPD officers responding to the scene confronted the robber. He pulled out a firearm and struck one officer in the chest. The officer went down, but luckily he wore a bulletproof vest and only suffered minor, non-life-threating injuries. The three other officers returned fire and the suspect went down. LVPD took the suspect into custody and he was whisked away to the hospital, where he later died of his injuries.

According to several notable poker players in the room at the time, they were unaware of any heist going down. Andrew Badecker tweeted via @Andrewbadecker, "Locked down in the poker room at #bellagio which supposedly was just robbed. No one noticed anything."

That's the second time the Bellagio poker room got robbed and no one noticed. Gamblers in Vegas often slip into their own bubble and lose themselves in their own tunnel vision.

The Bellagio's poker room has been a target of robberies in the past because of the access to a potential quick getaway due to the location of a secondary valet stand right off Flamingo. In November 2017, someone with a wig managed to rob the poker room's cage in swift manner. That robber made a quick exit and they are still at large.

The Bellagio itself has been a target multiple times in cinema and real life. A couple of years ago in March 2017, a crew of thieves in pig masks robbed the Rolex shop located just off the lobby. In December 2010, the infamous Bellagio Biker Bandit (who is the son of a local judge) rolled up to the casino and robbed a roulette table stealing a significant amount of cranberries (25K chips). The local police caught him when he tried to fence the cranberries.

Of course, there's the Steven Soderbergh film Ocean's 11, when Danny Ocean and his crew decide to rob the Bellagio, Mirage, and MGM. When they try to recruit old-school casino owner Rueben Tishkoff (played by Elliot Gould), he tells the Brad Pitt and George Clooney about the top three most-successful robberies in the history of Las Vegas.