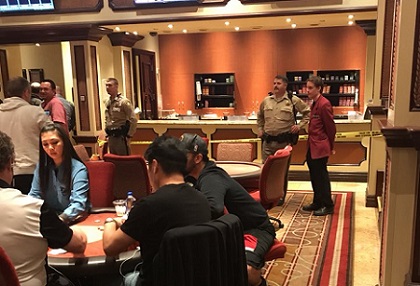 Another robbery at the Bellagio. This time, the cage at the poker room at the Bellagio Casino in Las Vegas got robbed at gunpoint. Approximately 3:50pm PT, an armed gunman quietly entered the poker room and robbed the cashier. The gunman escaped without any incidents with gamblers or other staff. The gunman fled out the North Valet doors. Anyone with clues, contact Las Vegas Police.

@LVMPD tweeted “BE ON THE LOOKOUT: Silver Chevrolet Cruze with NV license plate 37D147. A white male adult, armed, robbed a Bellagio Hotel/Casino cash cage around 3:45 today and fled in vehicle. Call 9-1-1 if vehicle is spotted.”

Several players in the poker room tweeted the incident moments after it occurred. Ryan LaPlante, James Woods, and Randy Ohel were among those posting about the robbery on social media. Ohel tweeted, “Cage is literal crime scene.”

Actor and Twitter troll James Woods mentioned, "So we are playing poker at the @BellagioPoker and a guy walks up with a gun and robs the cage thirty feet from us ten minutes ago. @Bellagio staff were fantastic. They surrendered the money quietly, so no customers would get hurt. Nobody even realized it was happening. Excellent staff, cool under pressure."

Earlier this year in March, a crew dressed in pig masks attempted to rob the Rolex store in the lobby of the Bellagio. Shots were fired during that incident, but no one was injured.

Las Vegas is still healing from the tragic shooting in front of Mandalay Bay a couple of months ago.

You can rob a casino, but you're eventually going to get caught. Just ask the infamous Bellagio Biker Bandit.

In December 2010, the Bellagio Biker Bandit struck the casino during a brazen robbery. Tony Carleo rolled up to the Bellagio on a motorcycle, then proceeded to rob a craps table for $1.5 million in chips, mostly the coveted $25,000 denomination cranberries. Earlier that month, Carleo robbed the Sun Coast poker room for nearly $19K. Carleo claimed an addiction to OxyContin and degen gambling led him down the self-destructive path that eventually got him thrown in jail for almost a decade.