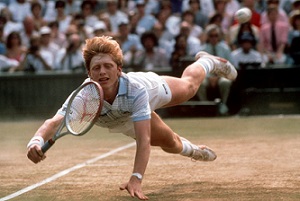 Once upon a time, the icy cool Boris Becker instilled fear into every opponent he faced. Since he made a slash on the circuit by becoming the youngest-ever Wimbledon champion, Becker dominated tennis in the late 1980s. The top-ranked player in the world won 6 overall Grand Slam titles in a short span, including three memorable wins at Wimbledon. These days, the former tennis wunderkind Becker is tennis coach. But he also happens to like playing poker, so much so, that partypoker tapped him to be their newest poker ambassador.

Boris Becker is really a baller. The first time I met him was in Argentina and he had not one, but two hot model-types accompanying him at the casino. These days, Becker turns to poker when he wants to get the competitive juices flowing. Meanwhile, Becker's fellow countrymen have dominated the high-stakes poker landscape the last couple of years, including Fedor Holz's insane run in 2016.

Becker has been a pitchman for international brands ever since he was a teenager. Most recently, online poker rooms have been trying to one up each other with celebrity endorsements. PokerStars announced their latest RaiseIt campaign with NBA star Dywane Wade and soccer star Ronaldo. In the past, PokerStars had used Rafael Nadal in various promotions and advertising campaigns.

I am equally competitive at the poker table as I was on the tennis court, so I'm really excited to be partnering with partypoker and taking on players around the world. I learnt to play poker a long time ago; it's a game of skill and perseverance, so I'm hoping to use my experience on the tennis court to my advantage. partypoker has some world class tournaments coming up and I look forward to playing online as well as live at the partypoker MILLIONS in April, so see you there!

Not to be outdone, partypoker turned to the former PokerStars pitchman and snatched up Boris Becker. He'll be the latest athlete/poker ambassador. And to celebrate the addition of Becker to the roster, partypoker is running a special promotion called… Beat the Ace.

You can play Boris Becker heads-up for $25,000 in cash. Find out more about their freerolls through their Beat the Ace missions.