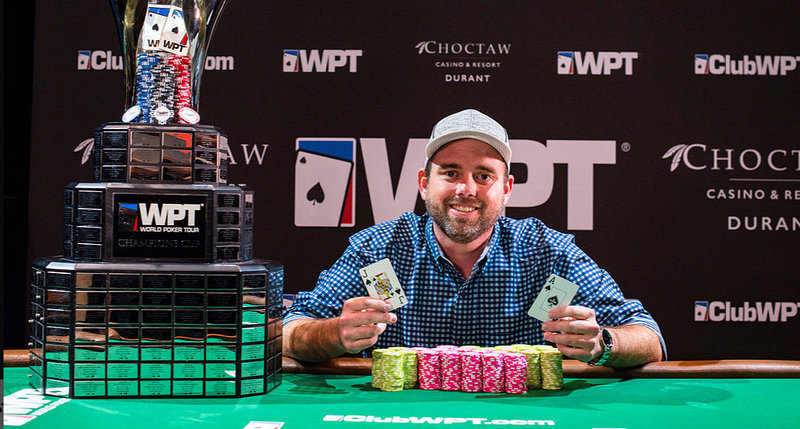 Ship it to Brian Holiman! The Choctaw Casino in Durant, Oklahoma has become a hotbed for poker over the last decade. There's no legal gambling in Texas, so Oklahoma provides ample gambling opportunities, especially for poker players. The Choctaw was a stop on the World Poker Tour. The 17th season is underway and 755 players took part in this $3,700 buy-in event.

You knew it was going to be Holiman's day when he snapped off Kings with Big Slick. Yeah, an Ace can be a heartbreaker. Dombroski had his Kings cracked was the first player to exit the final table when he bounced in sixth place courtesy of Holiman.

Anthony Zinno was seeking another big title... or his fourth overall on the WPT Alas, his run ended in fifth place. Zinno earned $125K for a couple days of work. Not too shabby for the three-time champ.

Tony Roberto was seeking another WPT title, he was the next out in fourth place. He walked away with $166K.

Chris Smith went deep and took third overall, which was worth a sick $233K. Smith's bustout set up a heads-up bout between Viet Vo and Brady Holiman.

Vo got it all in with pocket Kings, but you knew what was going to happen. Yeah, Holiman's Ace-Jack came from behind to crush the Cowboys. Instead of a fatal Ace, a couple of Jacks hit the flop. Ouch. Trip jacks for Holiman? Yup, and they held up. Vo hit the rail in second place and Holiman shipped the tournament.

Vo banked $320,725 for a runner-up prize. Brady Holiman took down a first-place payout worth a shade under $470K. Holiman also won a freeroll into the season-ending Tournament of Champions. That is valued at