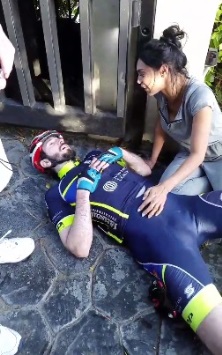 It's now been done three times. The treacherous ride thru Hunter S. Thompson's bat country, Las Vegas to Los Angeles, is nearly 300 miles of difficult terrain while on the fringes of Death Valley with more mountains and hills to climb that you imagine. Despite the arduous journey, the route has become a prop bettors' wet dream. Samantha Abernathy did the ride first. Then Dan Bilzerian did the ride in the most grandiose (can you say pomp and circumstance?) manner. And now it was Brian Rast's turn.

Brian Rast put up $100,000 of his own money at 6-1 odds from a joint wager between Dan Bilzerian and Bill Perkins. Rast would be undertaking the journey with less than a week of training. Sources suggested it was a mere three days before he made the ride. Rast had to adhere to a few guidelines including a slightly longer route of 320 miles, plus no usage of a drafting van (a controversial ploy that Bilzerian had utilized for the first segment of his journey) and he would not be able to use recumbent bicycles (a.k.a. an adult tricycle). Aside from those minor details, Rast had 48 hours to complete his journey. Although Rast was not training for a 300+ mile bike ride, he was in some of the best peak-shape of his life after training for a boxing match against Sorel Mizzi last December. Although Mizzi won, the two raised money for a charity called Raising for Effective Giving (REG).

Rast departed the “Welcome to Las Vegas” sign at 7:32pm on Monday. By Monday night, he was facing rigorous winds and had to take a break after only 60 miles (in 7 hours). On Tuesday, Rast was faced with more tough winds as he struggled to rendezvous with Perkins caravan in Barstow. Rast took another break in Barstow and bunked there for a few hours before he re-started his ride with more than 150 miles to go. "The beginning of the first night was super hairy," said Rast. "I was very worried. I knew that if the head wind did not die down, then I wouldn't be able to do it."

Despite knowing this would be the most difficult challenge of my life, this has exceeded expectations. Gut check time!

On Wednesday morning, Perkins tweeted that Rast was somewhere outside Palmdale, CA, which meant he took a slightly-easier but longer route to avoid the difficult-to-navigate Cajon Pass. The rest of the journey of 60 or so miles from Palmdale into the L.A. city limits was literally downhill. At that juncture, it seemed as though Rast was going to pull through. With an hour to spare, Rast completed the ride around 6:30pm local time. Rast mentioned that he experienced a minor panic attack 20 miles outside the finish line. When Perkins spoke to Rast on Periscope after winning the bet, Rast admitted that he was in serious pain, mostly from butt burn from sitting on the seat. He also experienced severe back pains from hunching over the handlebars... a result of only a few days of training. When asked about how he did the brutal feat: “Hydrocodone!” In case you squares at home are wondering… that's the fancy medical term for the painkiller Vicodin. If I'm Rast's agent, I'd be calling up BigPharma today seeking a sponsorship deal!

Rast explained that biking on the interstate I-15 wasn't as bad as he anticipated, mostly because his support vehicles kept him safe and they didn't see any police. “Why didn't we call the cops on you!?” joked Perkins.

If that was any more difficult, than I don't think I could have completed the task. I pushed myself to the absolute limit. #havethatforlife