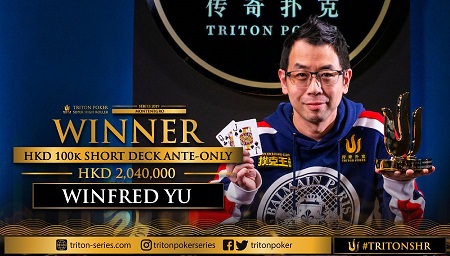 The Triton Super High Roller series in Montenegro continues. Two more events are in the book with American pro Bryn Kenney padding his stats for 2019. Kenney kicked off the year with a sick score Down Under by winning the Aussie Millions. Along the way, he had a good series at US Poker Open at the Aria. And although he didn't win it, Kenney took second place in another Triton event in Jeju, Korea for a $3.1 million score. Yeah, 2019 has been kind to the pro from New York.

And now, Brynn Kenney can add another high roller title to his resume with a victory in Event #2 HKD $500,000 NL 6-Max. Kenney faded a field of 79 players to win his latest title.

Ivan Leow, no stranger to these Tirton events, finished in third place for a little more than HKD $5 million. His elimination set up a heads-up battle between Bryn Kenney and Canadian pro Daniel Dvoress.

When the dust settled, Kenney emerged as the victor. Daniel Dvoress settled on second place. For a runner-up score, he earned HKD $7.4 million or approximately $94K USD.

Haxton settled on another runner-up finish. In Event #1, Haxton and Steve O'Dwyer chopped, but O'Dwyer won the heads-up battle for the title, trophy, and small mound of cash.