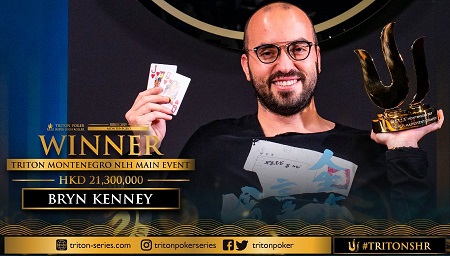 Another day, another high roller title for Bryn Kenney. Do not adjust your dials. This is not a repeat. Or a half-baked cut and paste job gone wrong. Bryn Kenney won his second title this week at the 2019 Triton Super High Roller Series in Montenegro at the Maestral Resort and Casino in Przno, Montenegro. The small fishing village has become an international hot spot for opulent high-stakes gaming.

The Triton Super High Roller Series returned to the Maestral again this year. This time, Bryn Kenney obliterated the high balla series that attracts the best high rollers from North and South America, Asia, and Europe.

Paul Phua made another super high roller final table, but he fell a couple of spots short of a Triton title. Phua got picked off in sixth place.

Canadian pro Sam Greenwood was knocked out in fifth place. The Badzman's run ended in fourth place. He missed a shot at another high roller title, but it wasn't meant to be for Badziakouski. He took home a little under $950K USD.

Peter Jetten went deep in another event but he had to settle on a third place finish. The Canadian banked approximately $1.25 million USD. Jetten's bustout set up the heads-up battle between Danny Tang and Bryn Kenney.

Tang could not stop Kenney and it's not his fault. Very few people have been able to stop the New Yorker this year. Danny Tang banked $1.8 million USD for second place. Not that bad of a score for the runner up, eh?

Kenney has now won almost $35 million in poker tournaments. Not too shabby, eh?

Kenney's hot year began with a win at the Aussie Millions in Australia, plus an impressive win the at the US Poker Open at the Aria in Las Vegas, not to mention a runner-up finish at the Triton SHRS Jeju. Kenney's 2019 run good continued with two more high roller titles in Montenegro. He padded his bankroll by $4.1 million this week (minus expenses, ho hum).

At press time, Justin Bonomo is at the top of the all-time money list with $44.2 million in winnings. Daniel Negreanu is second with $39.8 million. The rest of the Top 5 includes Erik Seidel's $35.3 million, Bryn Kenney' $34.8 million, and David Peters with $32.8 million.

Kenney knocked Fedor Holz out of the Top 5. According to Hendon Mob, Holz is now sixth overall with $32.5 million. Maybe he'll get bored with retirement and come back to the game full time?

Earlier this week, Steve O'Dwyer won the opening event at the Maestral Resort in Montenegro. O'Dwyer passed Phil Ivey and moved into 11th on the all-time money list with $27.5 million.