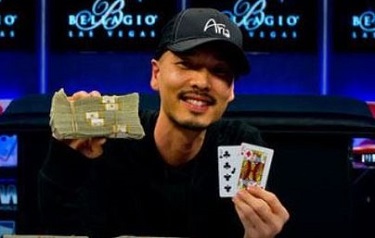 Chino is making a run! You know what that means? There's a caravan of debtors from SoCal and Vegas headed to San Jose as we speak. They're all rooting for Chino Rheem to win his fourth-career WPT title, which would put him out front with most career WPT wins. With nearly $1.4 million at stake, there's a ton to sweat tonight in San Jose.

Just a couple of weeks ago in Niagara Falls, Darren Elias won his third WPT title. That win in Canada propelled Elias into a rare club of three-time WPT champions with Gus Hansen, Carlos Mortensen, and Chino Rheem.

Chino shipped two WPT titles at the Bellagio in Vegas and won his third down in Hollywood, Florida at the Seminole Hard Rock Casino. Now he's on the verge of winning his fourth.

Only five other players stand in Chino's way from winning the WPT Shooting Star at the Bay 101 Casino in San Jose, CA. This year's record-setting field at Bay 101 included 806 entrants. The total prize pool topped $5.7 million. The top 81 places got a cut with nearly $1.4M for the champ. Not to mention Shooting Star bounties along the way.

Chino heads into the final table with a 10.6M stack, or nearly 3x as his closest competitor. A couple of notables made the final table including 2016 Super High Roller Bowl champ Rainer Kempe, Paul Volpe, Tony Spinella, Dennis Stevemer, and Sam Panzica.

The final table kicks off at 4pm local time. There is no livestream or webcast. Follow live blogging updates over at WPT's website.