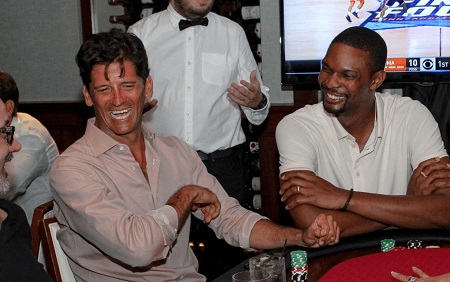 Charity poker tournaments are a fun way to help raise money. There's so much crazy and negative aspects about the poker world, that it's awesome when people can come together and do some good. There are plenty of good causes out there, especially ones that help the kids. So many kids fall through the cracks every year and as the saying goes, it takes a village to raise a child. Which in this case, includes a couple of tall guys and poker players. As funding for schools get cut year after year and in-school programs like art and music education get eradicated by budget cuts, kids are getting the short end of bad decisions made by checked-out adults and smarmy politicians. Luckily, there are kids in South Florida who might have a chance to get ahead in life thanks to After-School All-Stars.

For the last five years, the After-School All-Stars South Florida has been relying on a charity poker tournament to raise money for their amazing cause. They raised over $2 million since 2014 to help assist with the ASASSF.

After-School All-Stars is a special tuition-free program all over the United State of America. These special programs help out inner city kids by giving them a safe place to go when school ends. Their mission is simple: provide comprehensive after-school programs that keep children safe and help them success in school and in life.

Chris Bosh, at 6-foot-11, played 14 seasons in the NBA with the Toronto Raptors and Miami Heat. He's an 11-time NBA All-Star who averaged over 19 points per game in almost 900 total games. Bosh averaged 24 points and almost 11 rebounds per game in his final season with the Raptors. Bosh won two titles with the Miami Heat during an amazing back-to-back run in 2012-13 with LeBron James.

Bosh retired at the end of the 2017 season, but he's been involved with the local community in SoFla since he first arrived in Miami in 2010.

WSOP bracelet winner Loni Harwood went on to win the tournament this year. Harwood won over $3.1 million in tournaments including a piece of bling in 2013. She also binked a pair of WSOP Circuit events in 2012.

On Twitter as @Luscious_Lon, Harwood tweeted, "Super Thankful to @HardRockHolly to get invited to @chrisbosh charity event. And somehow shipped it. Let's gooo."