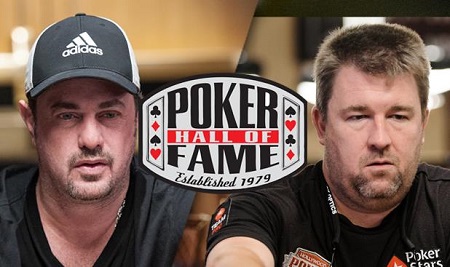 Congrats to Chris Moneymaker for getting inducted into the Poker Hall of Fame. I would not be writing this without Chris Moneymaker's epic run during the 2003 World Series of Poker at Binion's Horseshoe. There's no way I would have moved to Las Vegas in 2005 to become a poker reporter. This site probably would not exist in its current form. I would not have flown all over the planet covering the glorious online poker boom and met some of the coolest people (many of which are still among my closest freinds) without that mild-mannered account from Tennessee who won a satellite on PokerStars and help ignite the boom.

All hail, Chris Moneymaker! If anyone is deserving, it's Chris. He's been promoting poker as a perpetual ambassador for the last 16 years.

Chris Moneymaker and David Oppenheim will be among the 58 players currently in the Hall of Fame.

David Oppenheim is a pro's pro. He's one of those players that casual fans or people who only watch televised poker know about. Oppenheim was one of the young bucks who took Vegas by storm around the turn of the century. He cut his teeth before the boom and has his battle scars to prove it.

Oppenheim won less than $2 million in tournaments. He's never won a bracelet and the closest he came was a third-place finish in the 2010 Poker Players Championship for a $603K score.

Oppenheim is a mixed game player who frequented big stakes in cash games and held his own in tournaments. He swam with the big sharks pre-boom and fended off the waves and waves of donks during the boom.

If there were a Prop Betting Hall of Fame, Ted Forrest would be on my first ballot because he's been a part of some of the craziest prop bets over the last 20-plus years in both poker and Vegas circles.

Who doesn't love Antonio Esfandiari? But he's one of those players that is too young to get into the Hall of Fame. I mean, he's probably still in his peak years... which is why 40 years old is a terrible age requirement. The WSOP suits shot themselves in the foot with that one. I firmly believe it should be at least 55 or even higher. How about 65 (that's the retirement age)?

In regular sports, players reach their prime in their late 20s or early 30s depending on the sport. In the major pro sports in America, you do not see too many players 40+ lacing up the sneakers or cleats. Aside from Tom Brady and a couple of kickers or really old lefties in the MLB, you don't see 40-something dudes. The pro league have a grace period of several years in between a final season and becoming eligible for the Hall of Fame.

In poker, there's zero grace period. Just a milestone. Turn 40 and you can be eligible, so long as you meet the "requirements". Because players can play into their late years (heck Doyle was still effective into his 70s), the 40-year marker seemed like a horrible idea from the start. At this point, it's a total marketing scheme so I doubt the integrity of the Hall of Fame will outweigh the logic of it all.