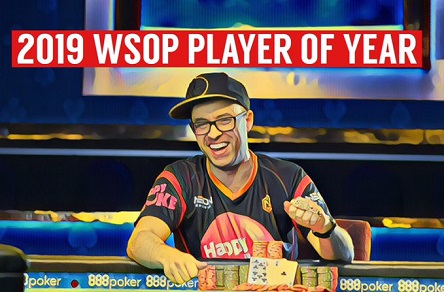 Not so fast there, KidPoker! Due to a diligent reporter crunching the numbers, we now have a new World Series of Poker Player of the Year. So please ignore the previous post about Kid Poker winning his third WSOP POY because we have a different winner... Robert Campbell from Australia.

The new numbers are in with Campbell as the champ and Deeb finishing in second place ahead of Kid Poker. Campbell and Deeb's numbers stay the same, but Negreanu's have been recalibrated to 3861.78. It appears that the WSOP double-checked ALL of the events.

So, we should be safe in saying that Robert Campbell is the 2019 WSOP POY winner.

Due to a data entry error, Negreanu and 14 others were awarded points in Event #69, an event he didn't even play. The clerk uploaded results for Event #87 instead, in which Negreanu cashed and earned 213.1 points. He essentially got points for Event #87 twice.

Campbell won two bracelets and came into the 2019 WSOP Europe with the overall lead ahead of Shaun Deeb (last year's winner) and Negreanu. Negreanu final tabled the 25K Mixed Games and cashed in 7 out of 15 WSOP Events to take the lead. So, we thought! The math ended up being wrong.

I thought it was a little strange that Negreanu won POY without actually winning a bracelet. Then again he cashed in 16 events (not 17 as originally thought with the Event #68 error) at the 2019 WSOP this summer with two second place finishes and then cashed seven more times in RozVegas at the 2019 WSOPE.

I guess it all made sense in the end... because he didn't win a POY without a bracelet.

Negreanu had previously won the POY twice before including the first time the WSOP tabulated POY points in 2004. Negreanu won again in 2013 with a pair of controversial bracelet wins (remember the WSOP Asia Pacific?) in Australia and France.

So, how come Kid Poker didn't say anything about the WSOP numbers? It's like getting the wrong cash from a cashier that made a mistake. You just say thank you, pocket the extra cash, and run like hell.

Hey, then again it's the WSOP. Things get weird during that 7-week stretch with so many tournaments that it starts to feel like Ground Hog's Day day after day of cloudy misery and bad beats and suckouts. I could understand forgetting about an event you played or didn't play because of the weirdness of the series.

Negreanu also had a very public spat with Shaun Deeb, so besting Deeb in POY was just more ammo for Kid Poker. Of course, now Deeb has a little newfound ammo of his own to use in future social media volleys between the two.

Anyway... congrats to Rob Campbell. This Negreanu's LA LA Land Oscars moment when Faye Dunaway and Warren Beatty incorrectly called out the wrong name and awarded the Academy Award to LA LA Land instead of Moonlight, which was supposed to win.

We've been made aware of an error on the 2019 POY leaderboard. After verifying results and points, Rob Campbell (@SonicJaxx2019) is the 2019 POY.

We'd like to apologize for this error, and offer our sincere congratulations to Rob!