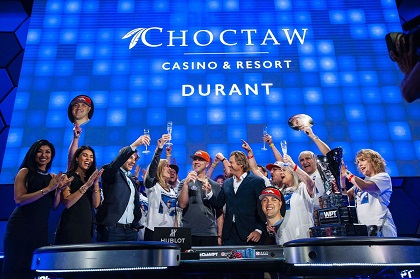 Ship it to Craig Varnell! The 2019 World Poker Tour concluded one of its delayed final tables at the HyperX eSports Arena at the Luxor Casino in Las Vegas. Craig Varnell took third place at the 2016 WPT Choctaw, which was won by pro James Mackey. Varnell found himself at another WPT Choctaw final table. Except, three years later, he would go all the way to ship his first WPT title.

Varnell, a pro based out of Denver, Colorado, won a bracelet at the 2018 WSOP in PLO and now he has a WPT title to add to his growing poker resume.

The 2019 WPT Choctaw in Durant, Oklahoma attracted 577 runners to the $3,700 buy-in Main Event. The prize pool fell short of $2M with a total of approximately $1.96M. Only the top 74 places paid out with the heady cheesecake at the final table.

Will Berry went into the final table with the chip lead with a stack worth 7.5M. Craig Varnell came in with 6.2M for second place. He had twice as much as Nicky P in third place.

Nick Pupillo led the mid-stacks with 3.1M, followed by Trung Pham's 2.6M and Austin Lewis 2.5M. Country singer Stacey Jones was the proverbial shorty with 980K and the only stack under 1M.

The final table was set 10 days earlier in Oklahoma. They only had a short delay before slugging it out in Las Vegas. The World Poker Tour delayed a slew of final tables this year and scheduled them t be played out at the HyperX eSports Arena at the Luxor Casino in Las Vegas. Just the other day, James Carroll won the delayed final table for the 2019 WPT Seminole Hard Rock Poker Showdown at the Luxo. Maria Ho finished in third place.

Anyway, the final six departed Oklahoma and headed for the bright lights and glitz of Las Vegas. A WPT title was on the line, along with a mound of cash and a free seat into the season-ending Tournament of Champions.

With the WPT Choctaw underway at the Luxor, Stacey Jones' survival skills paid off and avoided being the first player eliminated. Austin Lewis bowed out first and hit the bricks in sixth place. Stacey Jones' epic run ended in fifth place, which was worth $100,850.

Trung Pham hit the road in fourth place, while Nick Pupillo got picked off in third place.

Tough beat too. Nicky P took Ace-four into battle against Varnell's King-seven. And you know how those hands go, right? Varnell flopped trip sevens. Ouch. If one wasn't a kick in the junk, two were nut-crushing. Nicky P flopped a pair of fours, but they never improved. Trips won.

Pupillo banked $179K for third. His elimination set up the heavyweight bout between Berry and Varnell.

You kind of expected the two big dogs at the final table would meet in an evitable high noon showdown. Will Berry came into the final table with the chip lead and Craig Varnell was not far behind in second place.

Craig Varnell held nearly a 2-1 edge when heads up began. The battle lasted only 14 hands. Varnell put away Berry with good ole Ace-ten racing against pocket Ochos. Berry could not fade an overcard and Varnell flopped a pair of tens. Berry did not catch a miraculous eight on the turn or river. The Ochos were buried by Ace-ten. Varnell won the pot and the tournament

Will Berry banked $243,330 for a runner-up finish. Not too shabby for second place, eh?

Varnell won $379,990 for first place. Plus, he earned a freeroll (valued at $15,000) to the season-ending Tournament of Champions at the Aria. Perfect timing too... he could roll right out of the winner's circle and into the TOC.

Varnell has won $2.2 million over his career, including a third-place finish at the 2016 WPT Choctaw. Varnell shipped a PLO bracelet last summer at the 2018 WSOP.