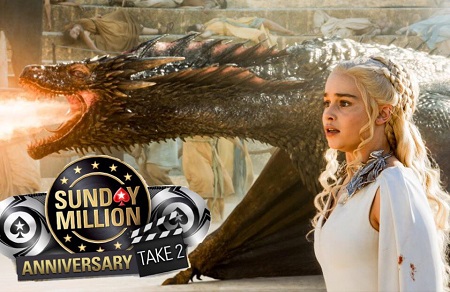 A million bucks can buy you some dank dragon eggs on the black market. I won't bury the lede here. A Game of Thrones geek from Holland playing under the screen name "Daenarys T" shipped a cool million for binking the Sunday Million. Daenarys T outlasted a field of 56,310 runners to win the two-day online event dubbed Sunday Million Anniversary: Take 2. It's not every day you see someone walk away with a seven-figure payout on a $215 buy-in tournament, but Daenarys T woke up today with $1 million more in his bankroll.

It was a heck of a week to play the Sunday Milly too with a juiced-up prize pool due to the special Take 2 promo. In total, the Take 2 boasted a $10 million guaranteed prize pool with at least $1 million set aside for the champion. When PokerStars ran this original promotion back in February for the Sunday Milly 12th birthday party, that event did not draw as many revelers as originally anticipated. As a result, the guarantee kicked in and the overlay was an astonishing $1.2 million.

Someone at PokerStars HQ got the brilliant idea to run the promotion a second time, but with an added twist. This time they'd add Platinum Passes to the mix. Who doesn't want a free trip to the Caribbean for two, plus a free seat to the $25K PokerStars Players Championship (PSPC) at the 2019 PCA at Atlantis Resort and Casino on Paradise Island in the Bahamas?

PokerStars pimped the heck out of the Sunday Million 12th Anniversary: Take 2 and their vertical BetStars offered prop bets on the number of entrants and prize pool. If you bet the OVER on both, you were a winner. As expected, the prize pool for the Sunday Million Take 2 exceeded $11.2 million with over 56K entries. The official numbers were 56,310 entries with 41,198 original runners plus 14,362 re-entries. The total prize pool was $11,262,000. The $10M guarantee did not kick in this time and PokerStars made up their overlay from the original February promotion.

Severin Rasset, PokerStars Director of Poker Innovation and Operations, said in the official presser. “We know a $10 million guarantee is not easy to reach, but we relish the challenge. We believe that our players want to play tournaments like this, where life-changing money is won and lifelong memories are made. If we miss a guarantee or two along the way, it's worth the risk!”

Only 735 players survived the cut at the end of play on Sunday. Bjorg0010 from Norway bagged up the most chips with a couple of sharks still circling the waters -- Tom "hitthehole" Middleton and Lena900. When action resumed on Day 2, Daenarys T went to work and unleashed the dragons.

Luxemburg's johnnyroquefort bubbled off the final table in tenth place, which paid out $44,709.48. Everyone at the final table locked up a min-cash worth $63K, but all the cheesecake was at the top of the heap. Third would net a half-mil, while the runner-up would walk away with $715K, and the champ got a million.

And yes, history was made with 2 players from Mongolia advancing to the final table. Noobanx finished in third place, yet still took home a sick payout worth $505K. And Sholkey989 finished in seventh overall.