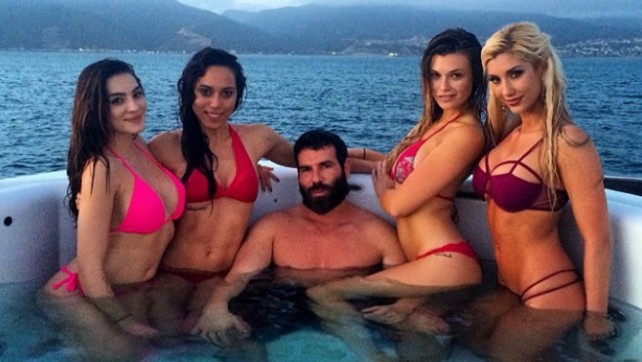 Want to talk about a redonkulous prop bet? How about the latest astronomical wager between Bill Perkins and Dan Bilzerian? Perkins and Bilzerian are both putting up $600,000 each on whether or not Bilzerian can ride a bicycle from Los Angeles to Las Vegas in under 48 hours. The time is clicking on the wager. Bilzerian has until May 31, 2016 to commence the journey.

The distance from Bilzerian's swanky compound in Los Angeles (filled with scantily clad models, stocked with high-grade military weapons, and stacks of cash) to the "Welcome to Las Vegas" sign at the tip of Las Vegas Blvd. is exactly 278 miles. Most of that is through what Hunter S. Thompson referred to as "Bat Country" in his novel Fear and Loathing in Las Vegas. Truly harsh conditions. The interstate from Los Angeles to Las Vegas drives through the outer edge of Death Valley. If Bilzerian pulls this insane journey off without dying or getting arrested, he'll earn every penny.

Everyone knows Dan Bilzerian's bawdy antics. Seems like the gawking public recognizes him more through his sensationalized social media lifestyle than through his accomplishments in poker. One thing for sure... it's never a dull moment in the ballerfied-life of Dan Bilzerian. If this $600K bike ride from LA>Vegas through Bat Country actually happens, it's going to be a fun watching it play out.

Bill Perkins was inadvertently involved in one of the more controversial moments in the history of the PCA. Perkins got Antonio Esfandiari in hot water at the start of the year in the Bahamas. Well, not Perkins per se...it was just that Esfandiari wanted to win the a high-stakes lunging prop bet so badly that he made a poor decision to relieve himself at the poker table instead of lunging toward the toilet. Alas, Antonio was quickly DQ'd from the PCA Main Event. Antonio admittedly made an uncouth decision to win the $50K prob bet, but he donated the winnings to charity.

High-stakes action is nothing out of the ordinary for Bill Perkins. He loves to put up large sums of money in order to see poker pros put themselves through excruciating physical pain. In many ways, that's one of the main reasons I sort of love Bill Perkins...he gets paid to torture people! And if he loses, at least he gets the satisfaction that the other person earned every cent. 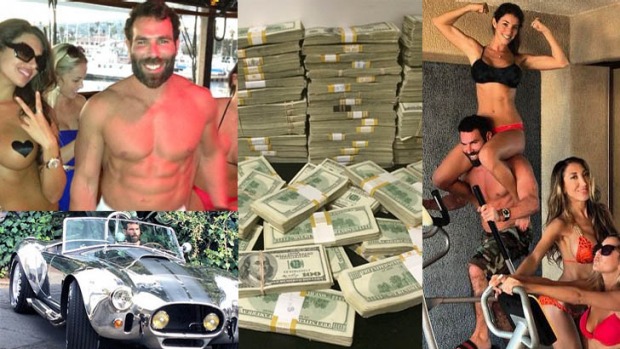 Whether it's Esfandiari and his lunges or Bilzerian and this potential ride through Bat Country, Perkins is not afraid to dangle the cash in front of these demented gamblers. Trying to win big money prop bets clouds your judgement and makes you do things you would never do otherwise. That's what makes them so risky and dangerous, but that added element makes it even more exciting to sweat from the sidelines. I hope someone like RedBull TV gets in on this action and livestreams the journey.

The $600K LA to Vegas bike bet initiated with a discussion involving Samantha Abernathy and Bilzerian. He offered Aberathy 72 hours to complete the arduous journey from Los Angeles to Las Vegas for $10,000. According to her own quickTwitter poll, only 30% thought she was "drawing dead", while 70% said "Do it anyway!"

The Abernathy suggestion inspired a discussion between Perkins and Bilzerian. They quickly got involved in their own negotiations and outlined a wager: $600,000 to ride a bicycle from Bilzerian's house to the Las Vegas sign.

Bilzerian allegedly has not been on a bike 20 years, but as the saying goes: it's like riding a bicycle... you never forget. But no one had to dust off a bicycle for the first time since Bill Clinton was President then ride through Bat Country to win a prop bet... with over $1 million.

As someone who lived in both Las Vegas and Los Angeles, I made the drive back and forth more times than I can count. The road has a couple of deceptively steep hills, plus before you even get out of the L.A. area, you have you have to climb the El Cajon pass which cuts through the San Bernardino Mountains and the San Gabriel Mountains. Hopefully no one gets arrested or detained by CHIPs or Nevada State police.

Perkins/Bilzerian $600K bike bet is probably the craziest prop I heard since Erick Lindgren nearly died of heat stroke in 2007 trying to win a $340,000 golfing pro bet. Lindgren bet Gavin Smith and Phil Ivey that he could shoot four rounds of golf – all sub-100 rounds – while carrying his bag. Without the benefit of a golf cart, Lindgren won the bet but nearly died of heat stroke while playing in 106+ degree temperatures.