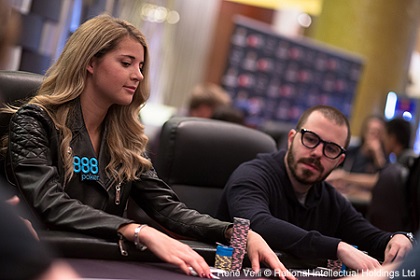 High ball action at the Bellagio Casino in Las Vegas. The annual Five Diamond Poker Classic is underway at the Bellagio. The $10K Main Event is also a World Poker Tour event, and the last major stop on the 2017 calendar year. This year's Five Diamond Classic included a pair of added events... both high rollers. Jason Koon won the $25K High Roller and Dan Smith took down the $100K Super High Roller.

The $100K at the Bellagio attracted 39 runners. The total prize pool was $3.9 million with only the top 6 places paying out. First place would earn the bulk of the pool with a $1.4M payday.

Kid Poker tweeted about that insane cooler of a hand, "Holy moly!!! Dan Smith AA all in against Schillhabel JT flop JTT!!!!! TURN ACE!!!! Heads up now guaranteed $936k playing for the title and $1.4 mill!"

The German's exit meant that Negreanu was heads up with Dan Smith. Smith held a slight lead with two to go. Kid Poker would have to wait another day to ship a SHR crown. Instead, Dan Smith took down the SHR title and a dope-ass prize worth $1.4 million.

The win vaulted Smith into the Top 18 on the all-time money list with $19.2M. That's quite an honor considering some of the names ahead of him. Smith is approaching the $20M mark. Meanwhile, Daniel Negreanu moved back into first place in the all-time money list. Negreanu overtook Erik Seidel ($33.2M) and Kid Poker now has over $34.1 million (USD) in career tournament earnings.