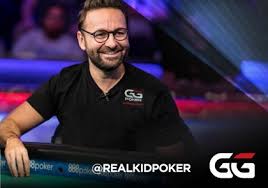 We love a good bracelet prop bet. It's even better whenever Daniel Negreanu is involved. Kid Poker, won who shipped six WSOP bracelets since his big splash in 1998, has come very close to winning bling the last few years, but for some reason or another, he's fallen short of the mark and can't break the heads-up slump. Last summer, he had a pair of runner-up finishes.

Negreanu has not won a WSOP bracelet in Las Vegas since 2008. He won two bracelets in 2013 during a pivotal overseas expansion of the WSOP brand… with a victory in the 2013 WSOP Asia $10K Main Event Championship and at the 2013 WSOP Europe 25K High Roller. Yeah, Negreanu shipped a pair of overseas bracelets. Lot of purists think those shouldn't count, but the suits running the WSOP count it, so he has six.

Can he win a seventh or even eighth this summer and fall? Negreanu thinks so and he's putting his money where his mouth is.

Negreanu almost won the 2019 WSOP Player of the Year, but due to an accounting error, he actually lost it to Aussie pro Robert Campbell. It was a weird, but honest clerical error. But it did not change the fact that Kid Poker had a strong summer last year with 23 total cashes (with 16 in Vegas at the Rio and seven more cashes the King's Casino in RozVegas).

At the 2019 WSOP in Vegas at the Rio, Negreanu was a double runner-up. He came super close with a second place finish in the $100K High Roller (losing heads-up to Keith Tilston), and he also took second place in the $10K Stud Championship (losing heads-up to Johnny World Hennigan). He also final-tabled the Razz event with a fifth-place finish and final tabled the Super Turbo to start the 2019 WSOP.

Negreanu missed two pieces of bling last summer. He got heads-up twice, but lost both times. You figure he's... 1) on a mission, and 2) overdue.

Negreanu, a pitchman for GGPoker, put up $1 million at 2.5 to 1 odds (or 5/2 odds for you math nits). He wanted to allow anyone to bet up to $100K against him. It did not take long for Negreanu to sell out after he posted his intentions on Twitter.

"Looking for action: I'll take 2.5 to 1 that I win a WSOP bracelet in 2020. Either: online at WSOP.com or @GGPokerOfficial. Or, if there is a live WSOP this fall. Tough to win against huge online fields. Will bet up to $1 million."

Of course, the big game is whether or not the WSOP actually plays out this fall. Vegas casinos opened up and it was a total shitshow because gamblers returned and many barely wore masks and were huffing cigs like it was their last deathstick. Word is out that after a couple weeks, casinos workers are already falling ill. Meanwhile, parts of the rest of the country are spiking with COVID cases and hospitalizations. The first wave is not even close to being over, so who knows if the WSOP will actually run its live event at the Rio this fall.

At least there's the 85-events online at WSOP.com and GGPoker. Negreanu said he'd play in both versions, but will have to be in Mexico in order to play on GGPoker, because they do not accept US players (ho hum, booo!). Of course, you must be in either NJ or Nevada for the WSOP.com events, so this will be tricky for Negreanu to play a full slate of WSOP Online events.

But ya, online tournaments are even harder to ship that live events (where Negreanu has an edge versus the random player).

Among the pros who bet against Negreanu in this action... Connor Drinan and Ali Imsirovic.