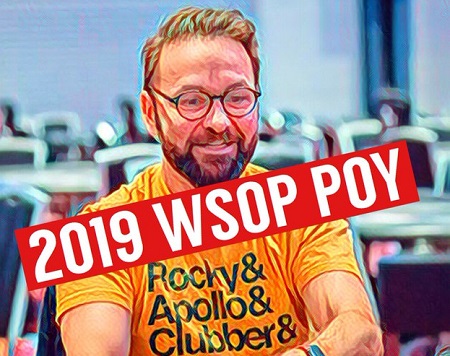 Ship it to Kid Poker... three times. It's hard to imagine that Kid Poker is not a kid anymore. He won the first WSOP Player of the Year back in 2004 when the WSOP played out in the old Binion's Horseshoe. The WSOP moved to the Rio in 2005 and that's when they started hanging gigantic banners with the POY portrait for everyone to see.

Negreanu will now have three portraits hanging from the rafters of the Rio. Kid Poker won his second one back in 2013 when he got hot and won two bracelets including victories at the defunct WSOP Asia Pacific and WSOP Europe in France.

In his illustrious career at the WSOP, Negreanu cashed at the WSOP 134 times and won 6 bracelets and 1 Circuit ring.

Negreanu cashed in 17 events at the 2019 WSOP with 4 final tables including two runner-up finishes in the $100K High Roller and $10K Stud Championship.

Kid Poker cashed in seven WSOPE events out of the 15 on the schedule. The final table appearance in the €25K Mixed Games propelled him over Shaun Deeb in second place and put him in a spot to beat Aussie pro Robert Campbell. After the 25K, Negreanu cashed in two more events including the Colossus to secure the victory.

Shaun Deeb had to finish in fifth place or higher in the final event of the WSOPE, the 2019 EuroColossus, in order to pass Negreanu and win back-to-back Player of the Year titles. Deeb went on an impressive and deep run, but he fell short of the final table when he busted in 11th place. Deeb finished in third place in the POY race with four cashes in RozVegas and cashed 17 at the 2019 WSOP at the Rio this past summer.

Kid Poker won the WSOP this year without slapping a piece of bling around his wrist. That never happened before, at least since they started tracking this in 2004. He came close and missed out a bracelet with a pair of second place finishes, but accumulated enough points between 24 combined cashes and five final tables in Vegas and RozVegas.

In 2004, back in the old days when the WSOP was still a boutique even in dingy downtown Vegas were it smelled more like urine and desperation. Negreanu cashed in six events and final tabled five of them. His lone bracelet win that May occurred in $2,000 Limit Hold'em, which marked his third overall bracelet.

In 2013, Negreanu won the WSOP Asia Pacific Main Event down under in Melbourne, Australia. He also won a High Roller bracelet at the 2013 WSOP Europe when it was hosted in France. He cashed in six WSOP events at the Rio in the summer of 2013 with a runner-up finish in Lowball. At the time, purists felt the non-Vegas bracelets should not count. Many of them still do. But Kid Poker won two non-Vegas bracelets that year to make his POY victory even more controversial.

Negreanu tweeted his thoughts on revamping the WSOP Player of the Year requirements, which included capping the number of events counted towards the points standing.

But yeah, Player of the Year should go to someone who won at least one bracelet. It seems weird that Asi Moshe won two bracelets (one in Vegas and one in RozVegas) and only finished 13th overall in POY points.