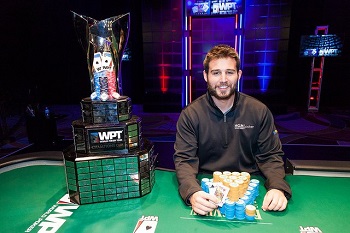 Ship it three times for Darren Elias (Pic via @WPTLive)

Ship it three times! The World Poker Tour has been around for nearly 15 years. In that span, the most titles any player has won is.... three. Before Friday night, only four players won thrice. That elite club of three-timers consisted of Gus Hansen, Carlos Mortensen, Anthony Zinno, and Chino Rheem. Chino earned his third title in April 2016. But now you can add one more name to the historic list... Darren Elias.

The American pro is one of those hybrid players than can crush you online or in real life. Elias amassed over $8 million in combined live/online tournament winnings. His online earnings are $3.8 million (according to PocketFives) and prior to the WPT Fallsview, Elias won over $4.1 million in live scores. At the 2012 WCOOP on PokerStars, Elias won the $10K High Roller for $575K. That WCOOP bracelet win marked his largest online score.

Elias won two WPTs back in 2014. His first win occurred at the Borgata Casino in Atlantic City in September 2014. Elias faded a massive field size of 1,226 to win $833K. That marked his largest single-score to date. Less than two months later, Elias bested a smaller field down in the Caribbean to win the WPT St. Maarten. He shipped $127K for his second WPT title.

The Fallsview Casino is located near Niagara Falls on the Canadian side of the U.S./Canada border. This event attracted 489 total entrants. The prize pool was worth more than $2.2M CAD for this $5K CAD buy-in event. WSOP bracelet winner Kristen Bicknell bubbled off the final table in seventh place. She narrowly missed becoming the second woman to win an open WPT event after Ema Zajmovic shipped a WPT title in Montreal last week.

The final table at the WPT Fallsview included David Eldridge, Jean-Christophe Ferreira, Andrew Chen, Manig Loeser, Abdull Hassan, and of course... Darren Elias. David Eldridge took over the lead when he knocked out Kristen Bicknell in seventh place. Eldridge held a huge lead with four to go, but that's as high as he'd get. Elias went into Terminator mode and knocked out his three opponents over the span of six hands. Heads-up lasted a mere three hands. Elias held a slight edge over Eldridge when it began, but Elias finished things off quickly. Three hands and that was it. For first place, Elias won $449,484 Canadian Dollars, or roughly $335K USD. Elias has won three titles in three different exotic locations... Niagara Falls, the Caribbean, and New Jersey.

Darren Elias even referenced Happy Gilmore in a tweet after his victory at WPT Fallsview...