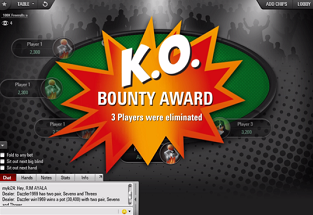 The race to purchase PokerStars is still wide open. Earlier this year, rumors swirled that William Hill was going to acquire/merge with the online poker giant. When those talks fell apart, a new rumor popped up that former Amaya CEO and founder David Baazov was interested in acquiring PokerStars for a hefty price tag worth $4.1 billion. Baazov does not personally have that sort of cash lying around, but he's always had a knack for putting together big deals, so he worked his magic and supposedly found backing from two financial groups based out of Hong Kong. Plus, Baazov already held a 17% stake in the company, which made him the second-largest single shareholder. He sought a deal worth approximately $6.7 billion to take PokerStars private again.

According to an article in Bloomberg, "Baazov's C$24 a share cash bid had been recast after a Dubai-based investor said last month its purported backing for the deal announced Nov. 14 was given without the firm's knowledge or consent. In a subsequent filing to the U.S. Securities and Exchange Commission, Baazov had said two Hong Kong funds -- Head and Shoulders Global Investment Fund SPC and Goldenway Capital SPC -- agreed to boost their support as a result."

And as a result of that news, Amaya's stock plunged.

SpringOwl Asset Management, which had been increasing its stake in Amaya, was highly critical of the deal put together by Baazov. SpringOwl (a.k.a. SOAM) suggested the deal was two low and "lacking in transparency." SOAM CEO Jason Ader had strong words for Baazov. According to Bloomberg, Ader "urged the company to shake off 'the undue influence' of Baazov and focus on growing the business."

It became evident that the share price premium demanded by certain shareholders exceeded the price at which my investors and I would be willing to complete a transaction.