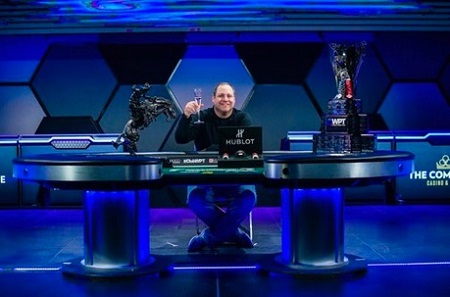 Ship it to ODB! David Baker is really one of the nicest guys on the poker tour. It's not unusual to have a common name with someone else, but it's highly unlikely to find a name doppelganger who is equally one of the nicest guys in poker. David Bakes Baker and David ODB Baker are two different guys from different walks of life, but they share the same name. Luckily savvy poker scribes came up with a way to differentiate the two with simple nicknames: Bakes and ODB.

ODB is a play off an old hip-hop legend Old Dirty Bastard. In this case, it's Old David Baker. He's the elder of the two David Bakers. And he finally got to hoist a WPT crown over his head. Well, actually he got to struggle to fondle the infamous LAPC Trophy, which is super heavy because it is a special cast-iron trophy by renown artist Frederic Remington.

But let's rewind a bit. The LA Poker Classic is an annual event at the Commerce Casino, located just outside of Los Angeles. The LAPC and WPT have been partners for as long as I can remember. Some of the biggest and best names from SoCal poker emerged as members of various final tables at the LAP over the years.

Last week, the WPT LAPC played down to a final table of six. The LAPC Main Event had a $10K buy-in and attracted 546 runners. The total prize pool topped $5.1 million. Only the top 69 places paid out with a cool million set aside to the champion.

When the dust settled, only six remained. Darren Elias, the four-time WPT champ, led the final six with a big stack worth 9M. ODB Baker was second overall with 4.7 million. Matas Cimbolas was not far behind with 4.6 million. Also in the mix were Jean-Claude Moussa, Steve Yea, and John Smith.

The final table was delayed, albeit for only a couple of days, while the finale was postponed to Monday in Las Vegas. The LAPC finale would be the first of multiple final tables at the HyperX Arena in Las Vegas this week.

Steve Yea was the first player to exit the stage at the HyperX Arena at the Luxor. He banked $201,650 for his efforts.

Smith, 72-year old veteran and Purple Heart recipient, was trying to become the oldest player in WPT History to win a title. He couldn't pull off the same magic in Las Vegas that he did in LA. His run ended in fifth place. He banked $267,400 for his excellent deep run.

Jean-Calude Moussa busted in fourth place, which set up a final three that included Darren Elias, ODB, and Cimbolas.

Alas, Darren Elias could not muster up enough juju to pull off a fifth score on the WPT. Elias' run ended in third place. He banked $472,289 for his efforts. Another near miss for Elias, who has become the most successful player in the history of the WPT.

With Elias bustout, that set up a big-time bout between ODB and Cimbolas. They were vying for a cool million. Second place paid out only $646K, so that was a significant amount of cheddar left on the table in addition to the massive Remington.

It took nearly two hours and 40 hands, but ODB finally put away Cimbolas. On the final hand, ODB caught a runner-runner straight with

For a runner-up finish, Cimbolas banked a tad under $647K. Not too shabby, eh?

David ODB Baker earned a first-place y out worth $1,015,000. ODB also got a freeroll into the season-ending Tournament of Champions at the Aria.