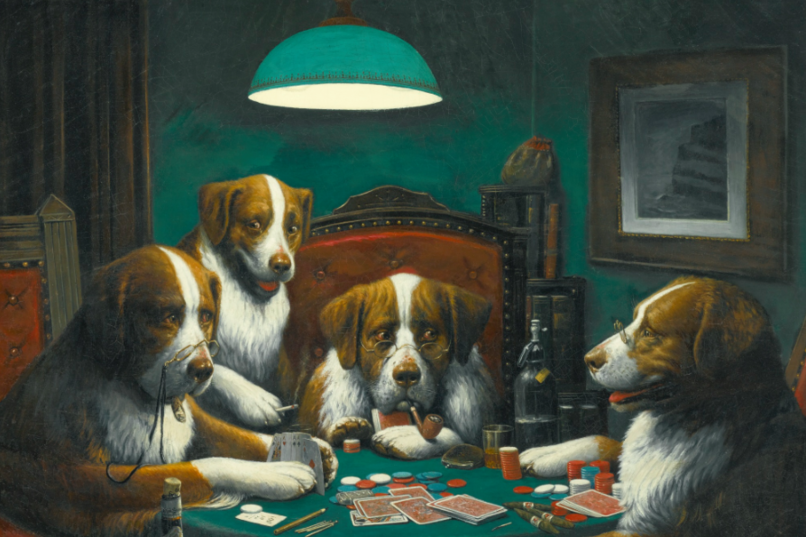 The art world has gone to the dogs.

That's not a flowery review by influential art critic Clement Greenberg, but it's today's big poker news. Everyone who has played poker has seen one of those "Dogs Playing Poker" paintings. Well, one of the original oil paintings by American artist Cassius Marcellus Coolidge was just sold at one of the most prestigious art auction houses in the world for the sum of $658,000.

In May of this year, a Picasso sold for $179 million, the highest price ever bid on at an art auction. Earlier this month, Chinese billionaire Liu Yiqian acquired a Modigliani for $170 million at Christie's, which was the second-highest sales price for a painting.

Although a painting in the infamous Dogs Playing Poker series did not fetch a nine-figure payday, it's safe to say that canine-themed poker paintings by Cassius Coolidge are more widely recognizable by the average poker player than say Modigliani's “Nu Couché” (a.k.a. “Reclining Nude”).

Last week, Coolidge's 1894 painting “Poker Game” sold for $658,000 at an auction at Sotheby's. Sure, that price tag is nothing close to the redonkulous sums post-impressionist paintings are getting, but as Mike Sexton would say, “The price of (dogs playing) poker is going up!” In 2005, two previous paintings by Coolidge (“A Bold Bluff” and “Waterloo: Two”) were sold together for $590,400 total at Doyle New York's annual Dogs in Art Auction.

It was after a trip to Europe in 1873 that he turned up in Rochester, New York, as the portraitist of dogs whose life-style mirrored the successful middle-class humans of his time. Coolidge's first customers were cigar companies, who printed copies of his paintings for giveaways. His fortunes rose when he signed a contract with the printers Brown & Bigelow, who turned out hundreds of thousands of copies of his dog-genre subjects as advertising posters, calendars, and prints.

“Coolidge's poker-faced style is still engaging today. His dogs fit with amazing ease into such human male phenomena as the all-night card game, the commuter train, and the ball park. His details of expression, clothing, and furniture are precise. Uncannily, the earnest animals resemble people we all know, causing distinctions of race, breed, and color to vanish and evoking the sentiment on an old Maryland gravestone: MAJOR Born a Dog Died a Gentleman” (“A Man's Life,” American Heritage, February 1973, p. 56).