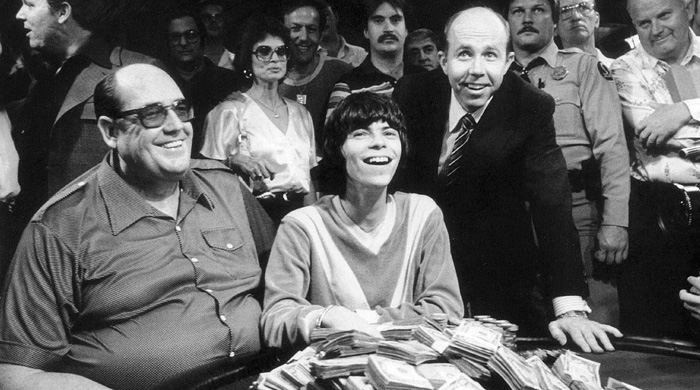 The legend keeps living for another day. The greatest living gambler of all time, Doyle Brunson, is most known for his iconic white Stetson. In old Hollywood westerns, the white hat reminded the audience that the character was a good guy because only the bad guys wore black hats. Brunson is regarded as one of the few holdouts from the rough and tumble days of poker. Brunson is the link to poker's murky and violent past, but he's also one of the many pioneers who risked his life – from both criminals and cops alike – in order to play poker.

Brunson is getting up there in age. At 82, he rarely plays the huge volume of poker that he used to. His most recent health issue required surgery. But the social media-savvy Brunson took to Twitter to inform the poker media and his fans that all was well. According to @TexDolly, "Cancer #6 gone. Squamous carcinoma gone bye bye. Just another scar on an already scarred up face.#Mosetreatment #luckyman #tyJesus." Yeah, Brunson dropped a "Thank you, Jesus!" hashtag in there. So if you're keeping score at home.... Texas Dolly 6, Cancer 0.

In 1962, Doyle Brunson was still a road gambler on the Texas circuit seeking out juicy games all around Texas and the southwest against deep-pocketed neo-rich oilmen, or any other well-to-do suckers that wanted to sit down to play a session with Brunson in whatever back-alley cardroom, or underground gambling hall would be spreading illegal games. Around that time, Brunson's brother had passed away from throat cancer, so Brunson wet to the doctor when he found a lump on his neck. The doctors told him it was a tumor. Brunson went into surgery for eight hours in Fort Worth, Texas but the surgeon did not get all of it because some of it had spread to his brain. The doctor mentioned to Brunson that he should get his personal affairs in order because his outlook was grim.

Brunson checked into MD Anderson Hospital in Houston, which is one of the leading cancer hospitals in the world. His goal was to stay alive long enough to see the birth of his first child because Brunson's wife was pregnant. The doctors in Houston discovered that his cancer had gone into "spontaneous remission." They could not figure out how it happened, but Brunson was convinced that his family and friends praying helped heal him. Don't forget, this was the heart of the Bible belt and Texas Baptists are a very devout group. Whether you are religious, or not...never underestimate the powers of positivity.

It was an intervention from God. I don't know why he'd want me around anyway...but I'm still here.

Brunson had several other cancer scares and health issues over the years. During the height of the poker boom in the early 2000s, Brunson was often seen playing nose bleed stakes at the Bellagio in Bobby's Room with his solo crutch leaning againt the wall,. The crutch handle was leather and had "Dolly" engraved in gold lettering on it. In the late 2000s, Brunson was also spotted on a scooter to help him navigate the maze-like cavernous convention center at the Rio Casino, which housed the WSOP.

When asked about advice for fighting cancer, Brunson quoted North Carolina State basketball coach Jim Valvano in his impassioned Espys speech: "Don't give up. Don't ever give up!" Here is a great interview with Texas Dolly that Phil Gordon conducted for his 1% cancer charity...