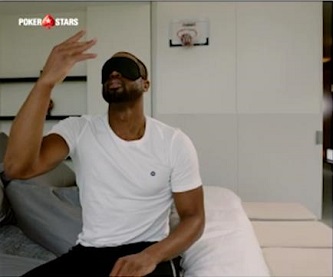 The social media dueling campaign Raise It (hashtag #raiseit) is a successful video campaign that PokerStars launched. They recently just released the second campaign for #raiseit featuring two of the most famous athletes in the world: Portuguese footballer Cristiano Ronaldo and American NBA player Dwyane Wade.

In the #raiseit campaign, Dwyane Wade (a.k.a D-Wade) will be dueling against Ronaldo in a series of challenges. In the first video, they both displayed their deft athletic skills. D-Wade nailed a basketball while blindfolded with his back to the rim and Ronaldo did d a few tricks with a soccer ball before scoring a bank-shot goal on his terrace.

In a PR blast, PokerStars explained: “Ronaldo and Wade battle it out by responding to challenges set by the other in a series of playful yet competitive #raiseit videos. The sporting pair showcase impressive football and basketball skills and tricks as they take turns to #raiseit to the next level with inventive video challenges in a bid to out-do each other.”

“Challenges often bring out the best in people and #raiseit is all about that so I'm really happy to be part of it,” explained Ronaldo. “Creating these videos allowed Dwyane and I to showcase some crazy tricks, and take each other on outside of the pitch and court. I think I have set the bar high for Dwyane, so we'll see what kind of skills he brings to the table in the next few months.”

I really enjoyed coming up with unique #raiseit ideas to out-smart Ronaldo. The challenge not only pushes boundaries but gets your imagination going. It gets you thinking, ‘What can I do to get that person fired up? And how can I think ahead and outsmart their response before they even act?' It's going to be a lot of fun to see how it plays out.

The first-ever #raiseit campaign was launched back in June and it featured two big football stars: Neymar Jr and Ronaldo Nazario from Brazil.

Simon Tilbury, Associate Director of Advertising for PokerStars, explains: “The first instalment of #raiseit featured Neymar Jr and Brazilian Ronaldo, and delivered over 40 million video views and record engagement scores for us. Now with Cristiano Ronaldo and Dwyane Wade showing us their ‘poker thinking' I'm confident they'll bring the PokerStars brand to an even wider audience.”

There will be 14 total #raiseit videos kicking off with the “SUPERSTAR WAKE UP” round. Watch the D-Wade and Ronaldo wake-up videos below…

NBA basketball player Dwyane Wade appeared in a PokerStars commercial along with Cristiano Ronaldo for the second campaign of PokerStars' Raise It social media promotion (#raiseit). Ronaldo, most-popular soccer star in the world, has been a pitchman for PokerStars for a while now, but this is the first time a high-profile American athlete has been used to promote PokerStars.


The #raiseit pushes a lot of boundaries while simultaneously igniting the creativity in a lot of people and people seem to work well when a challenge is involved. Sometimes I can't stand when celebrities jump into other areas aside from what they're known for but this idea looks fun.

Get ready for the brand-spanking new PokerGo Tour launched by PokerGo, which was created to establish a bona fide professional ranking system. This new PokerGO Tour will include 150 international events, including PokerGo's branded events -- US Poker Open, Poker Masters, and Super High Roller Bowl -- in which poker pros compete for the Poker Go Tour Player of the Year and an additional $100,000 in cash.