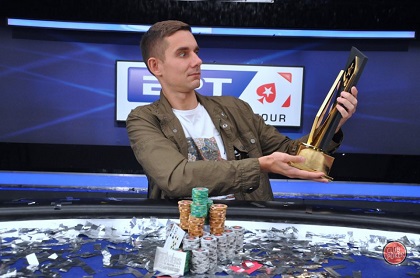 The 2018 ETP Barcelona concluded at the Casino Barcelona over the weekend. The €5,300 buy-in Main Event ended with an online qualifier, Piotr Nurzynski, winning the title and a little more than €1,037,109 in cash. Nurzynski prevented John Juanda from winning a second EPT Barcelona title and he also thwarted Ognyan Dimov's shot at becoming the second multiple winner on the EPT. Meanwhile, over in the nose-bleed section of the casino, Max Silver went all the way to win the last high roller event on the docket. Silver binked the €10,300 buy-in High Roller for a score worth €540,924.

The EPT Barcelona ran its 15th event with this year's Main Event. Tournament poker has come a long way in Europe since then, but Barcelona has always been the place to be at the end of the summer. Pros and neophytes alike flocked to the sunny beaches of Barcelona to take a shot at millions of dollars in prizes and an EPT title. Several players got their poker career kick started with a good run at the EPT Barcelona. And once again, an unknown player took a shot at the big time and walked away with a cool million.

If Piotr Nurzynski doesn't ring a bell... it shouldn't. The player from Poland did not have anything to brag about on his Hendon Mob profile. Piotr Nurzynski won a seat to the EPT Barcelona Main Event through a €250 satellite and then parlayed that seat into a million. From a PR and marketing stand point, you couldn't ask for a better winner! Piotr Nurzynski fit the bill. All he had to do was play the best poker of his life and outlast the biggest-ever in the history of the EPT Barcelona.

Nurzynski faded 1,931 runners. They boosted a prize pool to over €9.3 million.

John Juanda tried to become the first two-time winner at the EPT Barcelona, but the pro busted in ninth place.

The final four cut a deal that left some money on the table, along with a Platinum Pass to the 2019 PSPC. Pedro Marques busted in fourth and took home nearly €698K.

Dimov's elimination set up a heads-up battle between Wang and Nurzynski. Wang took down €859,050 for second place, while Nurzynski shipped nearly €1,037,109.

Nurzynski walked away with a Platinum Pass too. I guess you'll see him in the Bahamas.