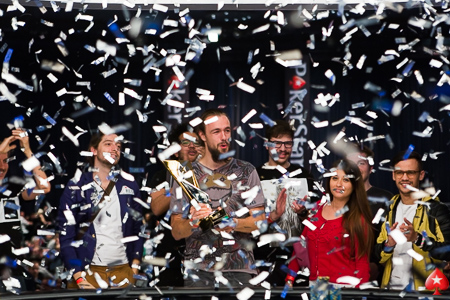 Monte Carlo. High stakes drama. Ali Reza Fate began the final table with a big stack, but there were way too many sharks for the international businessman to fend off. Ali Reza Fate made it as far as the final three, but he did not have enough bullets to fight. He was short-stacked against a pair of ravenous high-rolling sharks sitting atop a pair of mountainous big stacks. Ole Schemion picked off Fate in third place and the businessman went home with a decent payday worth €828,500.

Once it got heads-up between Mustapha ‘lasagnaaammm' Kanit and Ole Schemion, the final two quickly brokered a deal. They played out for the trophy, but it was definitely a heavyweight match between one of German's top players and one of Italy's premier young guns, and arguably the hottest player in poker (both combined online and live events). Ole Schemion came into heads up with a slight lead, but he bested Kanit. Despite the runner-up finish, Mustapha Kanit, continues to crush everyone in his path. Last year, Kanit rapidly advanced to the #1 slot on Italy's leaderboard for career earnings. After his impressive performance in Monte Carlo, Kanit added a second-place booty of €1,462,000 to his ballooning bankroll. Meanwhile, Schemion earned €1,597,800 for first place (or $1.8 million in Ameribucks. The German began the day with approximately $8.3 million in career earnings, but this SHR score will push him over the $10 million (USD) mark, thereby joining the ranks of fellow Germans in the $10M Club – Philipp Gruissem and Tobias Reinkemeier.

The most inspiring performance of the day came from short-stacked ninja Paul Newey. The cagey Brit barely made into the final table with a miniscule stack, but he essentially had nothing to lose once cards went into the air on Saturday. He avoided becoming the first player to bust, and somehow clawed his way to make it to the final five. Newey eventually busted in fifth place, and essentially doubled eighth places' min-cash prize. For full updates, check out the excellent coverage over at PokerStars Blog.

* with a heads-up deal