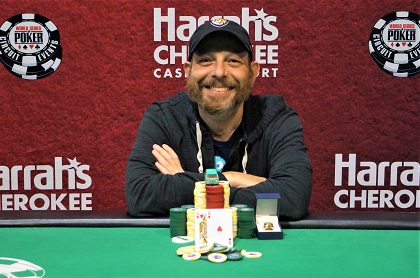 Ship it to Erik Gorman. The glassblower and Ravens fan from Maryland became the latest player to lay claim to a World Series of Poker Circuit ring. Gorman headed down to Cherokee, North Carolina to partake in the latest installment of the WSOP Circuit. The 2019 WSOP Circuit Cherokee featured 13 events this year including the marquee Main Event championship.

Todd Mercer shipped two events and two rings this series to earn the WSOP Circuit Harrah's Cherokee Casino Champion. He did not cash in the Main Event, but he still had a remarkable run over the last two weekends.

The WSOP Circuit Cherokee Main Event had a $1,700 buy-in and the round number of entrants with a smooth 1,000 runners. The Main Event had a $1,000,000 guaranteed prize pool, however, it did not have to kick in because the overall pool swelled to over $1.5 million. Only the top 150 places paid out with most of the cheesecake set aside to the champion and top three spots.

Heading into the final day of action, only 15 players were alive. Erik Gorman found himself with the shortstack. The narrative was easy to write in this final table recap because Gorman went from worst-to-first on the final day and crushed the final table on his way to a sick comeback victory.

Rothwell, Aldridge, White, and Cartwright (sounds like a litigation law firm) were the first four players booted from the final table.

Fikret Kovac hit the road when his

ran into Hannah Guthrie's pocket Aces. The Aces held up and Kovac hit the rail in fifth place. The big pot pushed Guthrie into a huge chip lead with four to go.

versus Gorman's pocket tens. The pair of tens held up and Gorman shot up in chips to close the gap between himself and Guthrie.

Mike Kassem made a final stand with Queen-ten, which was no match against Gorman's Ace-Jack. Gorman won the pot and headed into the heads-up with a slight lead over Guthrie. Kassem banked over $120K for third place.

The lead changed hands, but Gorman rallied back. On the final hand, Guthrie got it all-in with

. Ms. Slick held up for Gorman and Guthrie busted in second place.

For a runner-up finish, Guthrie earned $160,978. Not too shabby for a consolation prize, eh?

Erik Gorman shipped the tournament to win $260,480 in cash, plus a Circuit ring.