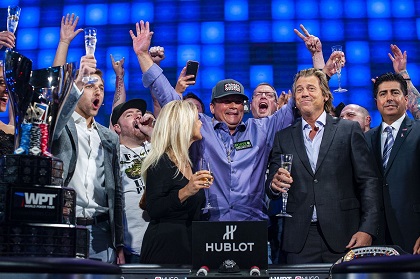 Ship it to Frank the Tank! Poker in the pyramid continued in Las Vegas. Frank Stepuchin won one of those delayed WPT final tables. He went deep at the WPT LA Gardens (located just outside of Los Angeles) and found himself at the final table that would not be played out until March in Las Vegas. The WPT is giving some of their final tables a superstar treatment inside a sank eSports Arena at the Luxor.

The final table of the $10K WPT Gardens included Shannon Shorr, Steve Sung, Brent Roberts, Ray Qartomy, and Jonathan Abdellatif. They were fighting for nearly $550K in cash and a seat into the TOC.

Jonathan Abdellatif became the first person to bust at the final table in the HyperX eSports Arena. he banked $100K for his efforts (and got a free trip to Vegas out of it).

Ray Qartomy hit the bricks in fifth place, which paid out almost $145K. Brent Roberts bowed out in fourth place. Steve Sung went deep, but his run ended in third place. Sung earned a little more than a quarter million for his efforts. His elimination set up the heads-up battle between Frank and Shorr.

Alas, Shannon Shorr could not overcome Frank the Tank. For a second-place finish, Shorr took home a shade under $356K. Not too shabby, eh?

Frank Stepuchin banked $548,825 in cash, plus a freeroll into the season-ending Tournament of Champions at the Aria in Las Vegas.

On Monday, the WPT kicked off its first delayed final table with the conclusion of the 2019 LA Poker Classic. The tournament began at the Commerce Casino, just outside of LA, and played down to a final six before migrating to Las Vegas. David ODB Baker went all the way inside the pyramid to win his first-ever WPT title. He also prevented Darren Elias from winning his fifth WPT crown. Elias made his 14th career final table at the WPT in a short span. Amazing. ODB pulled off the victory for a cool million.

There is one more delayed final table to go. The Borgata Winter Poker Open is set to play down for the final six to a champion tonight in Las Vegas. Same place too at the HyperX eSports Arena at the Luxor.