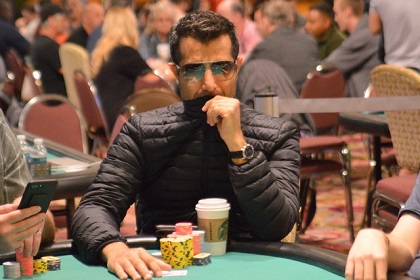 And then there were six at the Borgata! The swankiest hotel and casino in Atlantic City is hosting another major poker fiesta. The 2019 Borgata Poker Open Main Event is also a stop on the World Poker Tour. The WPT Borgata is the third event of the current season of the WPT. The anchor event at the Borgata's September festival of poker had a $3,500 buy-in and a $3 million guarantee. A total of 1,075 entrants took a shot at the title. The prize pool ballooned to over $3.4 million and the guarantee did not kick in. Everyone is fighting for the first-place prize worth $575,112.

Author turned poker shark Maria Konnikova had another deep run to talk about. She missed the final table by several spots, but she added a 20th place finish on her impressive resume.

Erkut Yilmaz bagged up the big stack at the end of the night. Yilmaz has more than 50% of the chips in play and nearly 3x s many chips as Oleg Shnaider in second place. The average stack is 7.1 million.

Everyone at the final table will take home at least $121K, with most of the pie going to the champ: $575K.

According to the Borgata Poker blog, John Lakatosh from Pennsylvania bubbled the final table when he busted in seventh place.

Ali Imsirovic was fresh off his purple jacket victory at the 2018 Poker Masters in Las Vegas. He flew out to Atlantic City with the purple afterglow and embarked on a deep run. But he ran out of gas at the final (full ring) table when he hit the bricks in ninth place. Heck of a run though over the last week of action.

The final table will be on a live stream, which is free for everyone to watch! The WPT Borgata final table stream (via 30-minute delay) starts at 2:30pm local time or 11:30am PT.