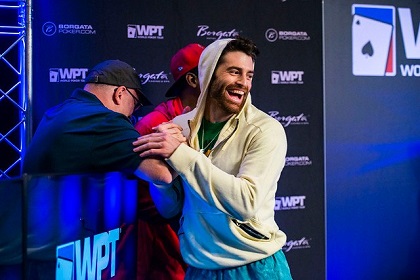 Ship it to Don Maloney. If the name sounds familiar, it is. Maloney is the surname of several notable hockey players. Donald Maloney is also a former hockey player. Injuries prevented him from making a career out of it in the NHL, but his father and uncle were notable pros. Don Maloney played ofr the New York Rangers and made a name for himself by playing hardnosed hockey. His son Donald Maloney brought the same mental toughness to the tables en route to his first major victory on the World Poker Tour.

Every September, the Borgata Casino in Atlantic City, New Jersey is the epicenter of poker on the East Coast with their big series that also includes a stop on the World Poker Tour.

The 2019 Borgata Poker Open attracted a massive field of 1,156 runners. The total prize pool ballooned to over $3 million. The Borgata takes care of their regulars and tries to spread the love a little more than the average tournament. The top 145 places paid out with the majority of the money going to the final table.

Dave Farah went into the final table with the chip lead and a big stack with 14.3 million. Uke Dauti was second with 8.7M and Kevin Albers, the token Brit at the final table, was third with a shade under 8M. Don Maloney and Jerry Maher are stuck in the middle. Victor Ramdin heads into the finale as the short stack with 3.5M.

Victor Ramdin, a gregarious pro from the Bronx and former ex-PokerStars sponsored player, went on a sensational run. Ramdin final tabled the WPT Borgata but he could not get anything going at the final table. Ramdin busted in sixth place, which paid out $130,672.

Jerry Maher was the next player to hit the bricks when he busted in fifth place. Dave Farah blew the chip lead and he fizzled out in fourth place. Kevin Albers bust out in third place, which paid out $304K. Albers' elimination set up a finale between Uke Dauti and Donald Maloney.

When the dust settled, Dauti could not prevent Maloney from going the distance. Dauti got picked off in second place, which paid out $410K for a runner-up share. Not too shabby, eh?

Donald Maloney won the title, the glory, and $616,186 in cash. He also won a freeroll intot he season-ending Tournament of Champions to be hosted at the end of May at the Aria Casino in Las Vegas.