FUN
Film Review: All In - The Poker Movie
by Pauly McGuire 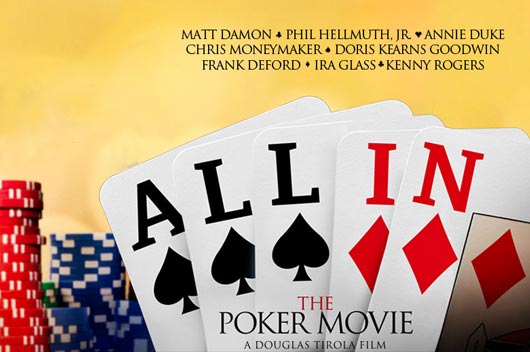 If you have access to Netflix, then you will find a documentary titled "All In: The Poker Movie." Glowing reviews of the film, directed by Douglas Tirola and produced by 4th Row Films, initially hit the intertubes shortly after the film's limited release in March of 2012.

The documentary "All In" is a survey course about poker, focusing on its rising popularity over the last two centuries. Tirola chronicles poker's highwatermark, and its glorious boom, fueled by Chris Moneymaker's stunning victory at the 2003 World Series of Poker's Main Event. Unfortunately, the film also covers the eventual downfall of the online poker industry, when the Department of Justice shut down major online sites on April 15, 2011, which has been dubbed 'Black Friday' in the poker community.

Poker, as the film argues, is as synonymous with America as baseball and apple pie. Even though the average person's poker experiences are rooted in low-stakes kitchen games, Hollywood glamorizes the game's outlaw nature. Since the inception of silent movies, poker has been a game played by renegades cavorting with scoundrels, outlaws, and derelicts. That's a powerful stigma to overcome, and it's been a perpetual black cloud hanging over poker, and often used by political opponents of online poker to push forward their “family values” agenda.

For me, watching the film was like taking a walk down memory lane by reliving the halcyon days of the poker boom. Hardcore fans will have similar nostalgic feelings, but at the same time, poker junkies might not enjoy the film because it is not specific enough. If I had one gripe, it's that the film barely scratched the surface of many intriguing side notes, like cheating scandals and the monumental role of television, in poker's rising popularity.

The story about how Chris Moneymaker became a household name is woven through the film in a series of candid interviews. A slew of familiar pros were also interviewed, including Phil Hellmuth, Annie Duke, Howard Lederer, Daniel Negreanu, and Greg Raymer. In addition, the film included non-poker star power, featuring interviews with actor and Oscar winner, Matt Damon, and musician, Kenny Rogers.

"Rounders" co-writer, Brian Koppleman, gave some insight into the illegal card rooms in New York City, including the Mayfair Club, where many of poker's biggest stars cut their teeth in poker, backgammon, and chess.

Production of All In began in 2009, and Black Friday (April 2011) occurred during the last stages of filming, so the director and producers wanted to include as much pertinent information on Black Friday as possible. A few of the interviewees pointed fingers at land-based casinos as corporations that would benefit the most financially. However, the film never delved any deeper into those allegations. Then again, this is a general film about poker, not one specifically about Black Friday. Someday, I hope an ambitious filmmaker uncovers the real reasons why online poker prohibition came to fruition.

I would have preferred the film to have included interviews with politicians and lobbyists that were both anti-online gaming and pro-poker. The UIGEA was tacked onto the Port Security Act without any public debate, so I felt it was important to include commentary from the initial principals involved—Congressmen Jim Leach and Robert Goodlatte, and Senators Jon Kyl and Bill Frist.

All In: The Poker Movie gives its viewers a glimpse of the eclectic, yet misunderstood world of poker. It's not quite as glamorous as depicted, but more importantly, it's not as menacing as the government thinks. Hopefully this documentary will help shatter any preconceived notions about the poker world and clear up misconceptions about the moral ambiguities of a thriving international industry.