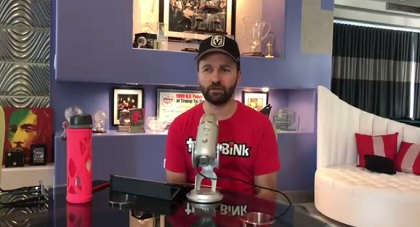 Daniel Negreanu is one of the hardest working pros in the poker world. He's been playing in events all over the world and he still found time to record a brand-new podcast. His Full Contact Poker Podcast is now up to Episode #15. The most-recent episode covers angle shooting. Sometimes you have to figure out what is really an angle shoot? Technically an angle shoot is legal, because it's a way to bend the rules in your favor, or to your benefit. If something you attempted got negated by a floor person, or TD, then it's not a legit angle shoot. Negreanu also discussed angel shots by various well-known pros such as Amarillo Slim, Shaun Deeb, and Puggy Pearson.

In the first example, Negreanu showed a clip from a live stream at the PokerStars Championship in Barcelona. One of the players was trying to illicit a response from their opponent and the results were a grey area of ethics.

Kid Poker told the tale about old-school hustler Amarillo Slim versus amateur/wealthy businessman Ron Rose. The hand went down in Europe pre-boom. In Vienna during a heads-up TV tournament, Slim and Rose battled heads-up. Slim raised from the button and Rose re-raised. The flop comes out with a King and Rose bet out. Slim says "Let's go!" Rose tabled pocket Kings for a set, but Slim never called. He tried to shoot an angle with vague language and never exactly said "call."

That's the exact definition of an angle. Sure, Rose should never had tabled his cards... but Slim got away with one.

Puggy Pearson loved to jerk chips back and forth in order to obtain free information from his opponent. He loved pulling that angle shoot according to Negreanu.

Negreanu also explained that he liked Shaun Deeb and thought he was a good guy, but "He had a distorted view on angle shooting."

Negreanu gave an example of Deeb playing a cash game reg during a Razz event at the WSOP. This example involved betting out of turn.

Watch/listen to the latest episode....