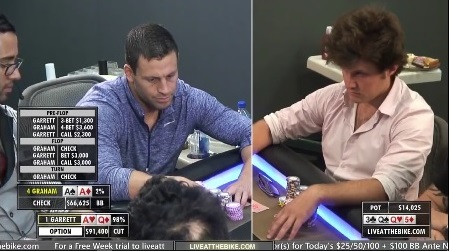 A couple of things of note on this Manic Monday in August. Who doesn't like high-stakes poker action? Who doesn't like a massive pot on a live stream? Late last week, a pot occurred that was regarded as the largest pot in Live at the Bike history. How big? $147,000! Yikes, that's some dope pocket change.

Live at the Bike has been airing live feeds of their cash games. Some of the regulars have become legends in the poker world, while relative unknowns have become internet famous overnight after a session. The $25/$50/$100 game attracts a rotating cash of locals and other random souls looking to gamble it up playing NL against aggro SoCal donk-sharks. If you like big swings and have cash to burn, you have to play poker in the cardrooms around Los Angeles.

Oh, and Molly Bloom is back in the news. This time it's all good news.

Bloom appeared as a guest at the Unibet Series in Bucharest, Romania. Bloom did a few appearances, including opening the #QueenRules Ladies event. The Unibet series was the first poker event and tournament series Bloom attended in several years.

Bloom sat down for numerous interviews with the poker media.

Mad Harper interviewed the charismatic Bloom. "Fantastic speaker," described Harper on Twitter. "Literally everything she says is a dream quote!"

Bloom spoke about the importance of getting the poker scenes right for hardcore poker players. "I told Aaron Sorkin, the director, that his toughest crowd was going to be poker players so he had better get it right!”

Robbie Strazynski is one of the hardest working people in poker media. Robbie sat down for an in-depth interview with Bloom in Bucharest. Bloom's book Molly's Game was a hit, even in the tough to crack East Coast literati. Molly's Game was optioned by Hollywood and actually got fast tracked to the big screen. It didn't sit on the shelf or stuck in development hell. Aaron Sorkin attached his name to the project. Not only did Sorkin adapted the screenplay, he also directed the film version. Molly's Game marked Sorkin's directorial debut.

You can read my film review of Molly's Game here.

Robbie asked Bloom about the pre-production of the film. Bloom thought a film-version of her story would give her a chance to rebrand herself and tell her side of the story, instead of the tabloids controlling and spinning their slant. Bloom sought out some of the best writers in Hollywood to bring her story to the big screen.

“I worked every day with Aaron Sorkin for eight months,” explained Bloom. “It's like being interrogated every day by a genius.”

Who doesn't like big hands? Check out one of the largest pots in the history of Live at the Bike. Garrett "Gman" Adelstein got involved in this $147K pot against someone called Graham. At the time, they were the two biggest stacks at the table with Adelstein sitting atop nearly $100K and Grahan with $73,325.

"He's a complete madman who is capable of having any two cards at any given time," explained Joey Ingram. "I would never fold Aces to Garret in my life!"

Joey Ingram breaks down the action in this video...