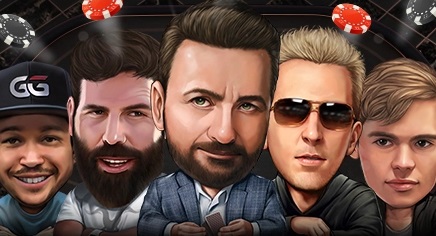 GG Poker has been aggressive in expanding their roster of ambassadors and pitchmen. Last year, GGPoker added Daniel Negreanu after he ended a 12-year relationship with PokerStars. Negreanu was a well-seasoned pitchman who knows how to leverage his fame into promoting the game of poker along with bringing new fans into the mix. Earlier this year, GG Poker made a wise move to add some of the top online players in the world, while appealing to their base in Europe. France's Elky is one of the GOATs, while Germany's Fedor Holz cracked the game wide open before he retired in his early 20s. In an effort to get a strong foothold into Brazil, GGPoker tapped Felipe 'Mojave' Ramos to join their staff. Ramos is also a savvy content creator and livestreamer, who has a huge and loyal following, not just from Brazil, but all over the world. GG Poker also added Bryn Kenney, one of the all-time money winners, to their stable of high-potent pros. In an effort

As you can see, GG Poker made strong moves to find ideal players and pros to help them expand their platform.

Enter Dan Bilzerian, the wealthy sun of a former Wall Street raider, once won $1.2 million riding a bicycle from Las Vegas to LA.

Love him or hate him, people are talking about him. Whether it was a publicity stunt, or just bad optics, GG Poker is getting no shortage of press and publicity out of this. Heck, even I got off my lazy ass to pen some click-bait about it. As the saying goes, there's no such thing as bad publicity.

But in this instance, there's been a huge reaction... and mostly all negative. Why? Because industry insiders know that it's more difficult than you think to monetize a celebrity's fanbase. You will get exposure, but how many will actually download the software and become an every day player? Time and time again, online poker sites and gaming companies chased clout all over the planet and on almost every aspect of the internet... and the results are still fairly low.

Gaming insiders are wary that Bilzerian can persuade his legion of fans to sign up for GG Poker accounts. I'm sure there'll be a huge uptick in new accounts, but how many of those accounts will reload and stick around for an extended amount of time? How many of his fans and stans will become a part of the poker ecosystem?

From a dollars and cents perspective, doubling down on Bilzerian is preaching to the choir. At first glance, it seems obvious that invoking the Bilzerian lifestyle is quickest way to access the bros and brahs out there. But how about the sisbrahs and cool ladies out there that also like games, competition, and poker? There's an entire planet that's half-full of women and GGPoker missed the boat. Big time.

In the past, poker sites tried to hire celebrity pitchmen and pitchwomen to boost their status. PokerStars threw tons of money at Kevin Hart a few years ago. How did that turn out? The red spade went all-in on soccer pros in Europe and Brazil, and how did that turn out?

David Bakes Baker summed it up best with his snarky tweet: "I don't know about y'all but I'm still busy counting all the money Kevin Hart and Usain Bolt brought into poker, not sure there is enough room for this Bliz money that's about to pour in."

Bilzerian is a conduit for the male id that loves all things hyper-masculine including guns, big-breasted and scantily clad women and a baller 'Wolf of Wolf Street' type of lifestyle than only a few people on this planet can truly afford. Everyone aspires to be something else and right now GG Poker is aspiring to attract those exact people and bring them into the fold at GG Poker.

"My god this industry is a cesspool," tweeted pro Melissa Burr.

When Deadspin is giving you guff over a bad and sleazy business decision, then you definitely shat the bed and screwed the pooch. Deadspin chatted with Burr, who gave her thoughts on the signing.

"I will find it insulting when people inevitably lump me in with this guy. It absolutely gives poker a bad name when one of their paid ambassadors calls a respected female poker player a ho. Poker already struggles to gain any kind of credibility. A publicity stunt like this will force the industry to take five steps back. It's another black eye, and we as a community need to express our disdain for representation like this."

"Dan is a huge influencer for poker and attracts exactly the kind of guys you want to play with," tweeted KidPoker. "I say it because... it happens to be true."

In one sense, poker pros would love to see redonkulously rich bros dump millions at the tables. But those guys are few and far between. The Andy Beal types, Texas Billionaires wanting to jump into the ring with sharks, are only accessible to a few pros. There's plenty of deep-pocketed billionaires in Asia, but getting access to those nosebleed tables is more difficult than you can imagine if you're not Phil Ivey, durrrr, or Jungleman.

Poker rooms are not fun places to visit as a woman, even for pros and enthusiasts. They have to put up with more guff and harassment during a single orbit than most guys experience in their entire lifetime. Online poker and the virtual tables always provided a safe haven for women and the LGBQT community because they don't have to deal with old-crusty white guys and bro culture.

If an online poker site that can figure out how to effectively market and attract women poker players, along with the LGBQT community, then will become the next industry leader.